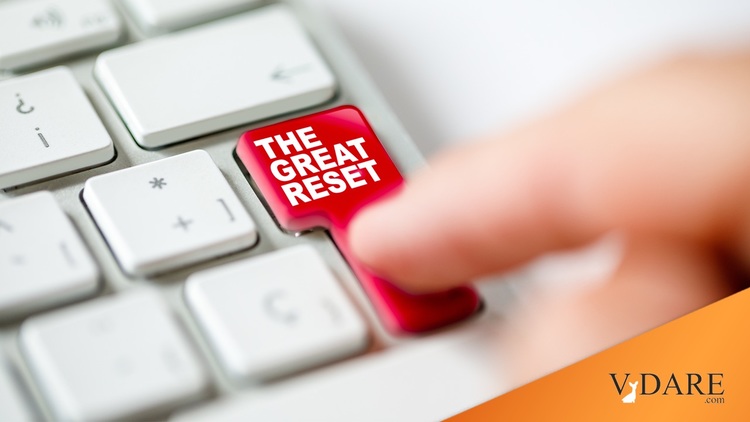 The Not So Great Reset: “Build Back Dumber”

With Moderna’s announcement on Monday of a second extremely effective vaccine (which reduces your chance of getting COVID by 18/19ths) to go along with Pfizer’s vaccine, we can now see a definite light at the end of the pandemic tunnel.

This will prove disappointing to many elites, who have enthusiastically latched onto the idea that the virus justifies “The Great Reset”: policies hyped to, as Joe Biden would say, “Build Back Better,” which, coincidentally, happen to be whatever they had already felt like doing to us beforehand.

For example, Time magazine’s Nov. 2, 2020, cover story “The Great Reset” includes a collection of featurettes by the Great and the Good explaining what they have in mind for us, which is mostly more of the same, only more so. …

I’m less worried that there is a carefully calculated master plan than that our elites are just making things up as they go along based on the latest Woke bad ideas.

By the way, I’ve long argued that a noteworthy real-life conspiracy is that the roots of the Obama Administration go back to a late 1980s plan by white Chicago Democrats (the Daleys, Rahm, the Pritzkers, etc.) to recruit classy blacks like Valerie Jarrett (who later hired Michelle Obama) as a front for tearing down near-Loop black housing projects and replacing them with upscale condos and retail for whites.

But nobody else seems much interested in my conspiracy theory, which I more or less adapted from a 2008 speech by Robert Fitch.