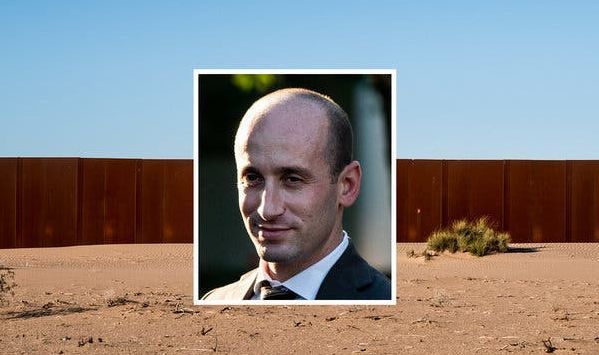 Speaking of leftist media strategies to sink President Trump in 2020, both the New York Times and Washington Post had front-page Sunday stories about presidential advisor Stephen Miller. Both had similar small headshot photos of Miller.

What are the odds of such a “coincidence”?? It’s amazing!

As mentioned earlier here, the Times held a big strategy meeting recently to switch the lies against Trump from the failed Russia hoax to the more easily administered accusation of “Racist!” Apparently the Post has signed on as well, since both articles included unproven charges against Miller.

Such allegations take little effort to deliver since the leftist media assumes anyone who objects to lawless open borders is of course a racist. Why else would a government official want to protect America from criminals, terrorists and job thieves? 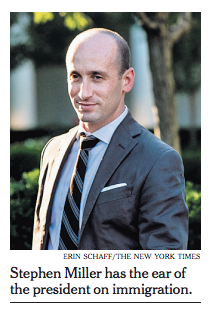 WASHINGTON — When historians try to explain how opponents of immigration captured the Republican Party, they may turn to the spring of 2007, when President George W. Bush threw his waning powers behind a legalization plan and conservative populists buried it in scorn.

Mr. Bush was so taken aback, he said he worried about America “losing its soul,” and immigration politics have never been the same.

That spring was significant for another reason, too: An intense young man with wary, hooded eyes and fiercely anti-immigrant views graduated from college and began a meteoric rise as a Republican operative. With the timing of a screenplay, the man and the moment converged.

Stephen Miller was 22 and looking for work in Washington. He lacked government experience but had media appearances on talk radio and Fox News and a history of pushing causes like “Islamo-Fascism Awareness Week.” A first-term congresswoman from Minnesota offered him a job interview and discovered they were reading the same book: a polemic warning that Muslim immigration could mean “the end of the world as we know it.”  [. . .]

Some of Mr. Miller’s Latino classmates say his comments made them feel personally attacked. In an interview, Jason Islas said Mr. Miller told him he was ending their friendship for reasons that included “my Latino heritage.” He added, “I think he is a racist.”

The Post started with a portrait of Miller as a puppet-master, but at least had the decency to allow him a response to the racism allegation:

At President Trump’s speeches and rallies, Stephen Miller often can be found backstage, watching the teleprompter operator. As other White House staffers chat or look at their phones, Miller’s attention remains glued to the controls.

The energy and crowd-thrilling parts of Trump’s speeches usually happen during his impromptu diversions from the planned address. When Trump veers, colleagues say, Miller sometimes directs the operator to scroll higher or lower through the speech, so when the president is ready to pick it up again, he will hit those passages and make those points.

Among Miller’s co-workers are a few who believe he harbors racist views. “I don’t know what other principle could animate such a laserlike focus,” said one former career official at DHS.

Miller bristled at the claim, calling anyone who labels him a racist “an ignorant fool, a liar and a reprobate who has no place in civilized society.”

“It is a scurrilous and scandalous lie born of a complete and total lack of understanding of the harms done by uncontrolled migration to people of all backgrounds, and born of a contempt for this nation, for our law enforcement officers and for the citizens who live here — and oftentimes, I might add, born of a personal grudge against this administration,” Miller said, without pause.

It goes without saying that the leftist media purveyors despise Trump voters as well as pro-sovereignty government.