The Murder of Nawal Aysheh: Are Chicago Authorities and the MSM Trying to Bury an Honor Killing? 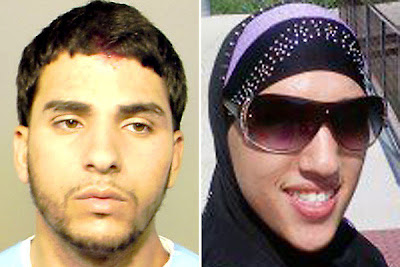 Ibrahim Aysheh, 22, left, was charged with Involuntary Manslaughter and Unlawful Use of Weapon in the death of his sister, Nawal Aysheh, 20, right. (handout (Ibrahim Aysheh), facebook.com (Nawal Aysheh) / October 15, 2012)

This last Saturday Nawal Aysheh, a 20 yr old female Muslim, was shot in the head and killed in her home. The report in the media simply described it as “domestic related.” Her own brother, Ibrahim Aysheh, has now been charged with involuntary manslaughter. His being a gang member was emphasized in the media report. I seriously wonder if this isn't really a so-called “honor killing” with the media avoiding that angle.

If Chicago Guy is right, this is a scandal on several levels. If this was an honor killing, it’s first-degree murder. Because the killing has been called “accidental,” it will be counted as a homicide (one person killing another), but not as a murder. Thus, the misleading identification would aid in the Chicago PD’s ongoing statistical legerdemain. Undercharging a member of an unconstitutionally protected class would also be a case of criminal justice affirmative action; instead of potentially facing a sentence of “life without (read: until) parole,” the killer would be looking at only a few years inside. And it would (should) be a journalistic scandal, due to the media covering up a case of first degree murder committed by a murderous ideology and immigrant group.

An additional question is raised by the bail: Who gets hit with $1M bond for an accidental killing? First-degree murder, I could understand, but involuntary man?

A man on supervision for a weapons conviction accidentally shot and killed his 20-year-old sister in their Northwest Side home over the weekend while showing her a pistol he claimed he had found on the street, prosecutors said today.

Ibrahim Aysheh, 22, was ordered held on $1 million bond on charges of involuntary manslaughter and unlawful use of weapon by a felon.

Aysheh and his sister, Nawal, were alone in his bedroom in the 4800 block of West Wolfram Street at about 9:10 a.m. Saturday when he showed her a .380 caliber handgun that he said he had “found hidden on the street,” Assistant State’s Atty. Yulia Nikolaevskaya said.

Aysheh took the clip out of the gun, saw that it was empty, put it back and pulled the trigger, Nikolaevskaya said.

“The gun went off and the defendant saw his sister fall to the ground,” Nikolaevskaya said. While he picked her up and carried her out of the house, their other sister called 911 and then hid the gun in a dog food bag in the basement, the prosecutor said.

At the time of the shooting, Aysheh was still on court supervision for a conviction for unlawful use of a weapon, Nikolaevskaya said. He had violated his probation in that case in 2011 and was sentenced to the Cook County boot camp program, she said.

[So, he got probation instead of jail, violated probation, and merely got “more” probation.]