The MSM Tries To Explain The Racial Wreckening On The Roads

Two weeks ago in Taki’s Magazine, I broke the big news story that after the Racial Reckoning was declared over George Floyd’s death on Memorial Day 2020, much like the historic surge in black-on-black shootings, black traffic fatalities had also soared by 36% relative to 2019 over the last seven months of the year. 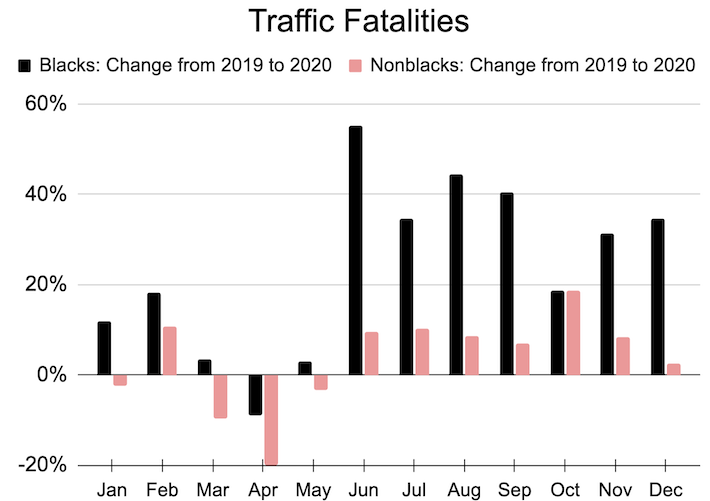 The sudden slaughter on the highways of blacks (black road deaths were up 55% in June 2020 over June 2019) is obviously due to the Racial Reckoning leading to black feelings suddenly being above the law and the cops backing off making traffic stops of blacks driving badly as The Establishment was demanding. Now, the mainstream media has finally figured out how it’s going to spin this news. I’ll give you one guess.

From NBC News via Yahoo News:

Why Black people are disproportionately dying in traffic accidents

Black people represented the largest increase in traffic deaths last year than any other racial group, even as Americans drove less overall due to the pandemic, according to recently released data.

An estimated 38,680 people died in motor vehicle traffic crashes in 2020 — the largest projected number of deaths since 2007, according [to] the U.S. Department of Transportation’s National Highway Traffic Safety Administration. The number of Black people who died in such crashes was up 23 percent from 2019, the largest increase in traffic deaths among racial groups, according to the administration’s report.

Norman Garrick, a civil and environmental engineering professor at the University of Connecticut, said the numbers are saddening, but not surprising.

“Black people tend to be overrepresented as walkers in this country,” Garrick said. “This is not by choice. In many cases, Black folks cannot afford motor vehicles. And people that walk in this country tend to experience a much, much higher rate of traffic fatality. We’re talking eight to 10 times more. It’s a perfect storm of a lot of horrible forces.”

OK, but according to the NHTSA report, across all races: “Pedestrian fatalities are projected to remain unchanged in 2020 as compared to 2019 (up 0%).” In contrast, road deaths in which a driver or passenger was ejected from his vehicle were up 20%. In other words, bad driving went way up, especially among blacks, but mostly not during the first three months of the pandemic (Mar–May 2020), but only after the Racial Reckoning was declared.

This most likely represents yet another way the health crisis has had an outsize effect on Black people.

There was another event in the headlines in 2020 that also had an outsize effect on black people: the Racial Reckoning.

But that can’t possibly have happened because more blacks dying in car crashes is a bad thing, while the Racial Reckoning is a good thing, and good things can’t cause bad things. That’s how the world works, isn’t it?

Also, your theory is in part that blacks chose to do things, like drive recklessly. But as we all know, blacks can’t choose what they do. At all times, they are wholly the helpless victims of whites.

Even in the early days of the pandemic, the National Safety Council found that the emptier roads were proving to be more deadly, with a 14 percent jump in roadway deaths per miles driven in March. And Black people are more likely to face traffic injuries in general; from 2010-2019, Black pedestrians were 82 percent more likely to be hit by drivers, according to a 2021 report from Smart Growth America, a Washington, D.C.-based advocacy group focused on urban development.

Which race of drivers are most likely to hit black pedestrians in black neighborhoods?

Look, as a daily walker, I’m a big advocate of improved pedestrian safety. I’ve said that if we are going to make the money printer go brrrrr to pay for infrastructure, more advanced traffic lights and crosswalks would be high on my personal priority list.

Calvin Gladney, president of Smart Growth America, said the pandemic has only exacerbated the longstanding problem. He said there are three major reasons Black people bear the brunt of roadway injuries: infrastructure, design and racism. Predominantly Black neighborhoods are less likely to have crosswalks, warning signs and other safety mechanisms, he said. And many high-speed highways are in or go through communities of color, thanks to a federal effort in the 1950s to modernize the nation’s roadways.

Or a big effort by blacks in the 1960s to move to conveniently located, short-commute urban neighborhoods that are well-served by highways and public transit.

And the infrastructure suddenly got much worse from May to June 2020?

Little to no infrastructure funding means those in Black neighborhoods live with poor roads, dangerous proximity to waste sites, little access to public transportation and more. Along with the systemic nature of this problem, Gladney pointed out that social racism also plays a role in the rising number of traffic fatalities. A 2017 study from the University of Nevada found that drivers are less likely to slow down or stop for Black pedestrians than they are for white ones. …

“The pandemic illuminated issues that people have been ignoring,” Gladney added. “These are the same streets and the same roads that have always been there. If we have intentionality to get to racial equity and close the disparities, we actually can fix this.”