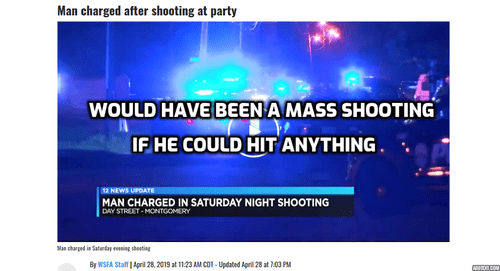 Here’s video of a shooting at an April birthday party in Montgomery, Alabama. [Language: NSFW]. I can’t count how many gunshots there were, but let’s just say: a lot.

But nobody was killed and only one person was wounded.

Note to the public: If you are going to risk your life to video a gunfight, turn your phone over sideways so you can film it in landscape mode.

From a 5 sentence story at WSFA:

According to Montgomery Police Captain Regina Duckett, Kennedy Wilson, 20, is charged with first-degree assault in connection with a shooting in the 1000 block of Day Street Road.

He’s the guy driving away in the minivan with the cop jogging after him. He got stuck in traffic and arrested.

You only get first-degree assault for starting a gunfight?

Duckett said the investigation indicates the shooting happened during a party. Wilson was taken into custody at the scene.

Suicide Shootings have higher average death tolls than Murder Shootings, which often have a high numbered of wounded. A key difference between Suicide and Murder shootings is the shooter hanging around to finish off the wounded.

Terrorism shootings are usually Suicide Shootings, but not always. The D.C. Snipers in 2002 might (or might not) be called terrorists, but they went to considerable trouble to get away. But they remain unusual.

Gang members are usually Murder Shooters who intend to get away. On the other hand, some gang shootings might be Suicide Shootings.

Murder Shootings make up a sizable fraction of the general homicide rate and likely track up and down with the overall murder rate.