The "Louisville Woman," The Sword, And Pizza Hut:"Causando Problemi" 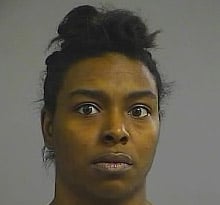 OK, when I saw a Drudge tweet saying "Customer pulls sword at PIZZA HUT… ", I had to look.

Since this is a story from a TV station, they provide a picture of the woman who (allegedly) tried to draw a sword in an argument in a Pizza Hut, so you can judge the racial element involved without detective work.

Which is good, since otherwise a report of an attempted swordfight in a Louisville restaurant would evoke redneck stereotypes. But all the stories I checked did have her picture.

LOUISVILLE, Ky. (WDRB Fox 41) — Police say a woman involved in an argument at a Louisville Pizza Hut raised the stakes considerably when she tried to pull a sword.

It happened Thursday night, shortly after 9 p.m. at the Pizza Hut on 7th St. Rd., near Dixie Hwy.

According to an arrest report, police were called to the restaurant after they received reports that 29-year-old Wynika Mason was "causing trouble." When they got there, she allegedly began yelling at the officers.

An employee told the officers that, shortly before they arrived, Mason began yelling at him and told him that she had a sword on her person. The employee said that Mason, "began to raise it out of the sheath" when her brother seized it from her and put it in their vehicle outside.

Police say Mason told them that she did indeed have a sword and it was still in the vehicle. Officers recovered the sword, according to the arrest report.

Officers say customers and employees were both inside the Pizza Hut when the events occurred, and that the employees, "felt threatened by her behavior."

Mason was charged with disorderly conduct and menacing.

The case has received some international attention: