The demographic transformation of our country is partially reflected in lists of the most common surnames.

The U.S. Census Bureau released the most common surnames in the U.S. according to the 2010 Census. As reported at the Daily Caller, six of those surnames are Spanish:

Six Hispanic surnames were among the top 15 common last names in 2010, according to figures released by the U.S. Census Bureau Thursday [December 15th].

Census: Lopez, Hernandez And Gonzalez Among Most Common American Surnames,

The article includes a chart with three columns containing the most numerous surnames in the past three censuses: 1990, 2000 and 2010. This shows you how rapidly the change is taking place. 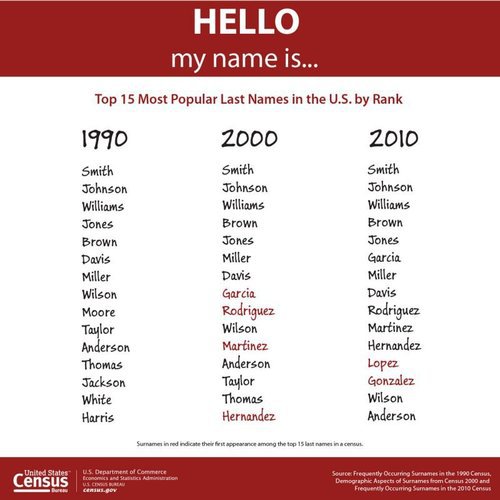 (Brown and White are two of my ancestral surnames).

In the 2000 census, four Spanish surnames were in the Top Fifteen list. Garcia was at #8, Rodriguez at #9, Martinez at #11, and Hernandez at #15. Moore, Jackson, White and Harris had dropped off the Top Fifteen.

Smith, Johnson and Williams remained at #1,#2, and #3 respectively throughout all three lists.

The Census Bureau also released the last names with the largest increase in frequency of use from 2000 to 2010. These are in descending order: Zhang, Li, Ali, Liu, Khan, Vazquez, Wang, Huang, Lin, Singh, Chen, Bautista, Velazquez, Patel, and Wu. There were fewer than 50,000 Zhangs in the United States in 2000 and now there are nearly 100,000. Nearly one in four newborn Americans are the children of immigrants and despite much focus on Latin America immigration, India, China, and the Philippines were among the top countries of origin for immigrants to the U.S. between 2010 to 2014.

Also on the topic of surnames, I invite readers to see my previous article entitled What's In A (Sur)Name? Plenty, If You're Planning An Amnesty . 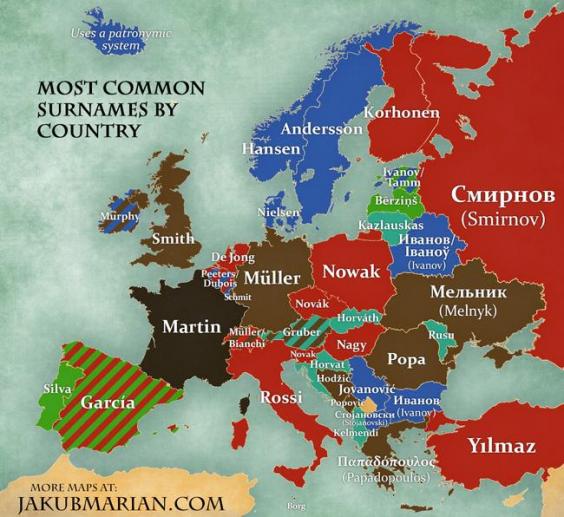 Right, a map   (click to enlarge) of the most common surnames in Europe, by country, courtesy of Czech linguist Jakub Marian.