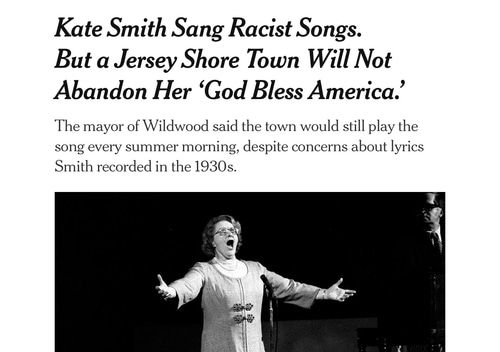 Kate Smith Sang Racist Songs. But Jersey Shore Town Will Not Abandon Her ‘God Bless America.’
The mayor of Wildwood said the town would still play the song every summer morning, despite concerns about lyrics Smith recorded in the 1930s. At the height of summer, when the boardwalk in Wildwood, N.J., is mobbed by beach-loving visitors, pretty much everything comes to a halt at 11 a.m.

That’s when the sunscreen-drenched crowd falls silent, the cacophony of loud voices replaced by a patriotic medley blasted from the boardwalk’s loudspeakers — “The Star-Spangled Banner’’ followed by Kate Smith’s famous version of “God Bless America.’’

The daily ritual, rooted in national pride, is a beloved local tradition. But it has now come under scrutiny after recent revelations that Smith’s recording catalog featured racist songs.

Nevertheless, the town’s mayor, Ernie Troiano Jr., insists that Wildwood had no plans to silence Smith.

“It is one of the most patriotic songs that was ever recorded,” Mr. Troiano said. “Why would I want to change tradition?”

The mayor’s stance differed from recent decisions by the New York Yankees and Philadelphia Flyers to stop playing Smith’s version of the song at their games after each team learned about the offensive songs, which were recorded in the 1930s.

Mr. Troiano’s spirited defense of preserving his town’s custom has placed Wildwood in the middle of a national cultural debate about political correctness and how America should reckon with its racist past.