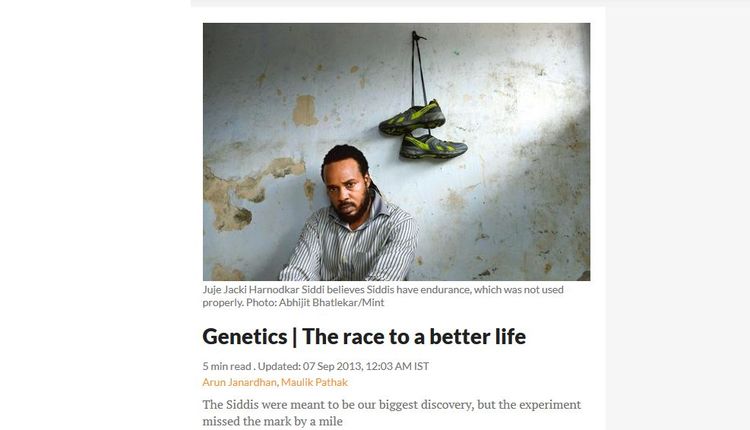 In India and Pakistan, there are somewhere around 50,000 Siddis: East African Bantus whose ancestors were brought to India hundreds of years ago by the Portuguese and/or Arab slave trades. Interestingly, back in the 1980s, the Indian government came up with the idea of turning their blacks into champion Olympic runners

Genetics | The race to a better life
5 min read . Updated: 07 Sep 2013, 12:03 AM IST
Arun Janardhan, Maulik Pathak
The Siddis were meant to be our biggest discovery, but the experiment missed the mark by a mile

… In the late 1980s, an ambitious project of the Special Area Games (SAG) programme spearheaded by the then sports minister Margaret Alva was implemented in Gujarat and Karnataka. Believing that the best athletes in the world, as showcased by the Los Angeles Olympics of 1984, were of African origin, SAG—formed in 1985 to find special talent outside of major cities—decided to search among the Siddis, a tribe whose origins can be traced back to south-east Africa.

So in 1988, athletics coach Sunder Raju and other officials of the Sports Authority of India (SAI) travelled to the Gir National Park in Gujarat to find the little-known Siddis, many of whom had settled in this part of the world. In Karnataka, the same story repeated: in Haliyal, Karwar district, from villages like Yellapura and Mundgod, more Siddi children were rounded up by SAI coaches and told to run. Several were selected, sent to SAI centres across the country for further testing and training. …

A few years later, by 1992-93, the initiative ended, with the existing Siddis in camps weeded out and left to fend for themselves. Some founds jobs, others returned to their villages. The genetic supremacy theory that the government wanted to explore lay in ruins.

There is no clear scientific evidence in this case whether the Siddis’ origins made them natural-born athletes. But those who supported the programme say their performance in that short period of time proves they had potential. “What we got were malnourished children,” says Rachana Govil, then SAI’s assistant director in Bangalore, whose late husband Ravannan was one of the coaches for the project. “Inspite of that, with just some months of training, they were winning medals and breaking records.”

There is a combination of reasons why this project petered out. … “Also, they made a mistake: the East African body structure is good for long distance running, but they tried us only for sprints,” says Juje.