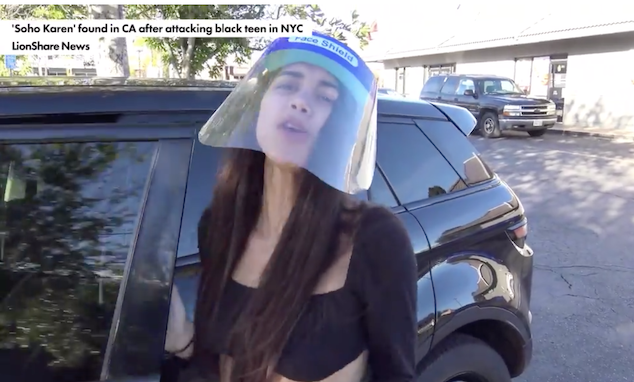 From the New York Times, proof that the late Tom Wolfe will never fade from relevance in America:

Woman Who Tackled Black Teenager at SoHo Hotel Is Arrested

For more than a week, the authorities in New York City have faced mounting public pressure to arrest a woman caught on video tackling a Black teenager in the lobby of a boutique hotel in SoHo after falsely accusing him of stealing her cellphone.

Now, detectives are traveling to California to interview the woman, the police said on Thursday — an unusual step often reserved for crimes that are violent or high profile.

It was not yet clear if that meant the woman, identified by her lawyer as Miya Ponsetto, 22, would face any charges in connection with the Dec. 26 incident. …

The episode was yet another instance of Black people being confronted with baseless accusations while going about their daily lives. It has drawn comparisons to an incident in May when a white woman called 911 to falsely claim that a Black bird-watcher in Central Park was threatening her life.

The video was taken and posted on social media by Keyon Harrold, a prominent jazz musician, who was staying at the Arlo hotel with his 14-year-old son, Keyon Harrold, Jr.

Mr. Harrold said he was told by the hotel that an Uber driver found Ms. Ponsetto’s phone later in the day, and she picked it up from the hotel.

Ms. Ponsetto has been the subject of public scrutiny and speculation about possible criminal charges since the video emerged. According to public records, she faces unrelated criminal charges in California, including a lewd conduct charge in Los Angeles County involving an incident in February and a driving while intoxicated charge in Ventura County following an incident in October.

Prosecutors in California did not immediately provide more details.

In an interview on Wednesday, Ms. Ponsetto’s lawyer, Sharen H. Ghatan, confirmed Ms. Ponsetto was the woman in the Arlo hotel video. She said Ms. Ponsetto regretted her actions and was seeking to apologize in person to Mr. Harrold and his family. As of Thursday morning, the police had not contacted Ms. Ponsetto, Ms. Ghatan said.

Ms. Ghatan said Ms. Ponsetto was not targeting Mr. Harrold or his son because of their race. She is of Puerto Rican and Vietnamese descent and does not identify as white, Ms. Ghatan said.

“She’s not trying to make any racial statement,” Ms. Ghatan said. “She’s a female herself of mixed cultural descent. She’s not some blond-haired, blue eyed privileged white lady. She literally just wanted to get her phone back.” …

Mr. Harrold said Ms. Ponsetto’s actions demanded more than an apology. He said that both her behavior and the hotel manager’s actions reflected a systemic problem where Black people — and Black teenagers in particular — are seen as threats or outsiders.

Mr. Harrold described his son as innocent and impressionable — “an aspiring music producer, drummer, artist, who loves being around his friends.” But, he said, he is too often not seen that way. “He’s made out to be criminal. He’s made out to be a threat. That’s the thing that needs to change.”

The Police Department has said that they were not treating the confrontation as a “bias incident.” But it has drawn widespread attention as a striking example of racial profiling.

Joseph L. Giacalone, a retired New York City police sergeant and an adjunct professor at John Jay College of Criminal Justice, said that the pressure from the public on the Police Department “is just immense here,” particularly given the recent protests against systemic racism following the death of George Floyd in Minneapolis.

He said that it was a rarity for detectives to travel across the country for anything other than murder or cold case investigations. …

At a separate news conference, the Rev. Al Sharpton and civil rights lawyer Benjamin Crump, who is representing Mr. Harrold, called on prosecutors and the police to bring charges.

So Rev. Bacon from Bonfire of the Vanities puts in an appearance.

“This has larger implications,” Mr. Crump said. “It was Emmett Till who was falsely accused and racially profiled that led to him being killed.”