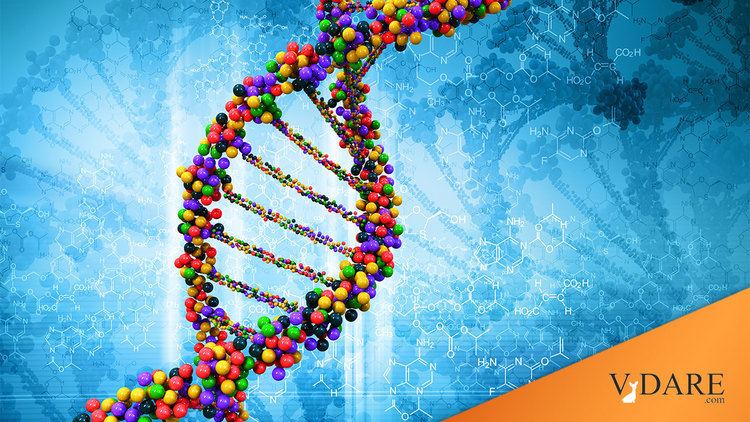 We Know They Said "Created Equal." But They Didn't Mean…

Human Genome Project scientists have been conspiring with journalists recently to lard press reports on their findings with politically-correct disinformation.

Nobody was bamboozled more than former GOP vice presidential candidate Jack Kemp, who informed us, "The human genome project shows there is no genetic way to tell races apart. For scientific purposes, race simply doesn't exist."

Of course, if all you know is what you read in the newspapers, you're not going to know much about the scientific reality of race.

"The human genome, to be published in nearly complete form this week in the journals Nature and Science, stands to cure cancer, prevent mental illness, and even, as one local researcher joked, locate the "don't-ask-for-directions gene" on the Y chromosome unique to men. But billions of pieces of genetic code sequenced thus far are notable for what they don't appear to contain: a genetic test to tell one race of people from another."

"I don't know what they are talking about. I suspect it's all political. These days, you could certainly screw up your academic career with a single truthful comment," snorted Dr. Cochran. "No such thing as race? Then how can population geneticists like L.L. Cavalli-Sforza calculate your ancestry from different parts of the world to the percentage point? How come forensic anthropologists can determine a suspect's racial makeup from hair or semen left at the scene of a crime?"

Indeed, the Canadian Society of Forensic Sciences even provides a handy web page where crime fighters can enter the data from nine loci of DNA extracted from crime scene evidence. Then, by comparing this individual's DNA to racial databases provided by the Royal Canadian Mounted Police and the FBI, the website calculates for them the odds that the perp belonged to such racial groups as Caucasians, African-Americans, East Asians, East Indians, and "Saskatchewan Aboriginals."

Cochran is a physicist turned evolutionary biologist. He is best known for developing the "New Germ Theory," which attempts to drag medicine into the Darwinian age. He argues that germs, not genes, must cause most chronic diseases like cancer and heart disease because, according to Darwin's theory of natural selection, killer genes tend to kill themselves off. (Click here to read the February, 1999 Atlantic Monthly cover story about Cochran and his research partner, Paul Ewald, a prominent public health biologist at Amherst College. Click here to buy Ewald's recent book, Plague Time: How Stealth Infections Are Causing Cancers, Heart Disease, and Other Deadly Ailments.  And for the scientifically-inclined, click here for Cochran and Ewald's landmark scientific paper "Infectious Causation of Diseases: An Evolutionary Perspective.")

Maggie Fox of Reuters asserted that the Human Genome scientists "have also confirmed that there is no genetic basis for what people describe as race, and found only a few small differences set one person apart from another. … [W]e all are essentially identical twins - even more than I thought. … [R]ace is not a scientific concept,' [Craig] Venter [of Celera Corp.] said."

I asked Cochran, "Can differences in only a small number of genes account for racial differences in looks, physical abilities, personality, and other capabilities?"

"Sure they can," Cochran replied. "We don't know for sure for any particular trait, but it's often a definite possibility."

"Go ask the guys working on the Dog Genome project about how few genes separate Dachshunds from Weimaraners." Cochran suggested. "Go ask the cattle breeders. There are only a few genetic differences between Guernseys and Longhorns. Yet they sure act different. It's not cultural. Longhorns don't learn how to act like Longhorns by watching Western movies!"

Folks, genetic differences are all relative. The notion that, say, basketball behemoth Shaquille O'Neal and Supreme Court Justice Ruth Bader Ginsburg are "essentially identical twins" is more likely to make sense to three-headed flying saucer pilots from the planet Zweeb than to their fellow Earthlings. Differences among humans that would seem negligible to Zweebian saucer jockeys can loom very large in influencing, say, who makes the NBA All Star Game (which, you may have noticed, had only one white player again this year).

Of course, the Zweebsters would probably consider humans to be "essentially identical twins" to all other mammals on Earth. As Venter himself pointed out, "There are only a few hundred genes that we have in the human genome that are not in the mouse genome." Another story reported, "Given the minor difference between man and mouse, Dr. Venter said he expected the chimpanzee, which parted company from the human line only five million years ago, to have an almost identical set of genes as people but to possess variant forms of these genes." So, Venter's statements about how large the variances among humans are in some ill-defined absolute sense are meaningless.

The announcement that the number of human genes is probably in the range of 30,000 rather than 100,000 - as was widely guesstimated until recently - has inspired all sorts of propaganda about how this shows that nurture is more powerful than nature. Harvard paleontologist Steven Jay Gould unburdened himself of some of his trademark sonorous imponderables in The New York Times.

"The social meaning may finally liberate us from the simplistic and harmful idea, false for many other reasons as well, that each aspect of our being, either physical or behavioral, may be ascribed to the action of a particular gene "for" the trait in question. But the deepest ramifications will be scientific or philosophical in the largest sense."

Robin McKie of The Guardian (U.K.) made the same point more blatantly:

"This is a far lower total than expected, and dramatically undermines claims that human beings are prisoners of their genes.… 'We simply do not have enough genes for this idea of biological determinism to be right,' said Dr Craig Venter, the U.S. scientist whose company Celera was a major player in the sequencing project. 'The wonderful diversity of the human species is not hard-wired in our genetic code. Our environments are critical.'"

Do fewer genes mean nurture is more important than we had thought?

"It means no such thing," said Cochran.

We already have a very good idea of how important genes are from twin and adoption studies. Identical twins are genetically identical. For a surprising number of traits, identical twins raised apart are more similar than fraternal twins raised together. And the correlations between adopted siblings tend to be very low. Whatever the final number of genes turns out to be can't make those facts disappear.

This spin is the logical equivalent of Exxon announcing that they've discovered that cars have 30,000 parts in them instead of 100,000, and therefore you should buy expensive premium gas. "Hey," Exxon would say, "Even if experience has shown you that high octane gas doesn't help your car's performance much, the Car Genome Project has demonstrated scientifically that your car has fewer parts than you thought it did, so the difference between Ferraris and Plymouth Voyagers must be environmental. Who are you going to believe: Science! … Or your lying eyes? So, spend, spend, spend!"

Why do Human Genome laboratory scientists so often issue unsupportable pronouncements about race? A leading genetic anthropologist reflected, "I can understand the genome people spouting it: they are afraid of bad press about genetics. The posturing is defensive." (See my VDARE essay on race scientist Cavalli-Sforza's addiction to politically correct boilerplate.)

However, he went on to note another cause: the "bench" scientists who have become media celebrities during Human Genome Mania don't actually know much about what they are asked to comment upon. "Human evolutionary genetics has lots of people who are geniuses in the lab ('good hands') and who contribute great data sets but who have no clue about what they mean," said this veteran anthropologist, who has spent years working with both the most sophisticated mathematical population genetics models and with the Bushmen of the Kalahari. "What people like these guys you see quoted know about is whether to put vinegar or lemon juice in the test tube."

Cochran backed this anthropologist up. He feels the lab guys seldom understand evolutionary theory. "They say a lot of things that aren't true, like these genes are going to explain the roots of most diseases," Cochran argued. "From twin studies, we can see that no more than 5% or 10% of major chronic diseases are likely to stem from heredity. A full 3% percent of breast cancer appears to derive from bad genes."

According to Cochran, "The Human Genome Project will uncover a lot of interesting stuff, but how much will be good for human health? Developing new antibiotics will be a lot more effective over the next few decades."

According to Cochran, the fundamental flaw of the Human Genome Project is that "Genes exist for function, not for disease."

In an upcoming essay, I'll describe in more detail why genetic research is going to uncover less about health and more about racial differences than the media want to know.