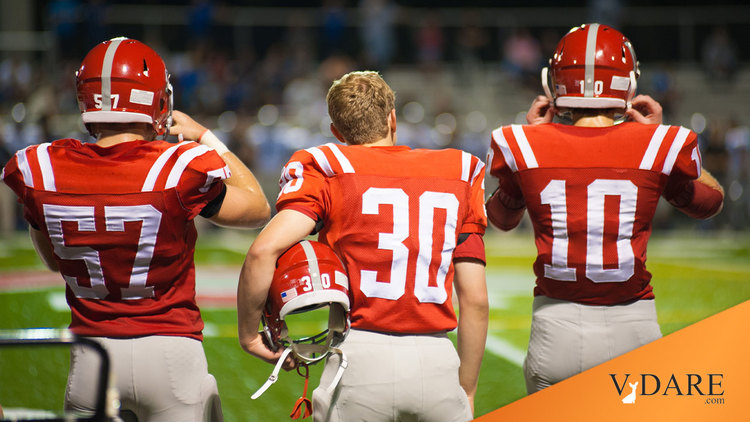 I count nine Catholic schools, seven of them in blue states.

Most of the others appear to be red state exurban public high schools, often with large enrollments. E.g., Westlake outside of Austin has 2,800 students and Corona Centennial in SoCal’s Inland Empire has 3,100 students.

I’d be interested, however, in how many of the star players in these public schools are local kids versus recruits, maybe for whose family an apartment has been rented in the district.

One exception to the Catholic and exurban public dominance is Miami Central H.S., which is an 80% black public school in urban Miami.

Another distinctive school is #2 ranked IMG Academy in Bradenton, Florida, founded by the International Management Group sports agency. It’s a boarding school for super jocks, such as many of the most famous tennis players of recent times.

Do high school football programs normally go through ups and downs? Once you get one superstar player, it’s much easier to attract high-potential athletes. For example, in the c. 1990 documentary Hoop Dreams, one coach is famous because Isiah Thomas of the Detroit Pistons (the old one, not the current Isaiah Thomas) played for him so everybody wants to play for him. But it’s not clear if he really made Isiah Thomas what he is today, or if he just got lucky to snag a future Hall of Famer.

Some schools stay on top seemingly forever. De La Salle Concord, a Catholic boys’ school from northeast of Oakland near suburban Walnut Creek, has been outstanding for decades. They aren’t quite as good as when they won 151 games in a row, they even lost to another NorCal team this year, but they are still outstanding.

On the other hand, other programs go through ups and downs.

My guess is that one problem is that coaches push recruiting athletes from the the inner city harder and harder, taking ever more chances on kids whom other coaches are leery of, until Something Bad happens. And then they back off for awhile until everybody forgets.

For example, when my son was a high school freshman at a small school, his school came from behind to narrowly edge out a nearby expensive private school with one black player, a very small speedster. It was a close, fun game and I looked forward to the rivalry. But by the time he was a junior, the other school had recruited a half dozen giant blacks and beat them 46-0. Then in his senior year, all the giant blacks were gone from the other team, leaving only the very small speedster, and it was another close, fun game.

Maybe all-boys schools like De La Salle are less likely to have Something Bad happen than coed schools?