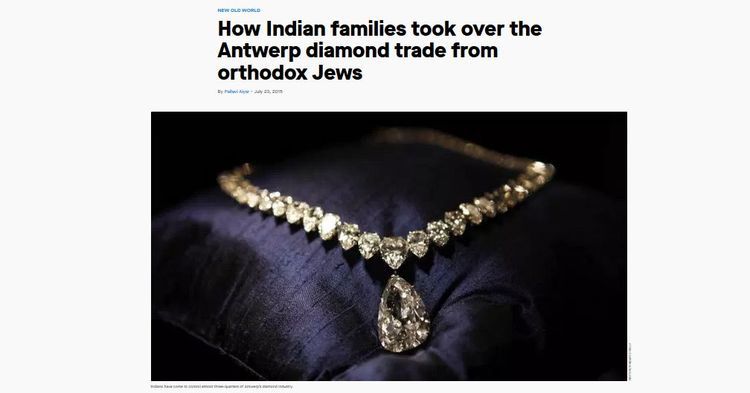 As a commenter pointed out about my review of This Land Is Our Land: An Immigrant’s Manifesto by Suketu Mehta, the scion of an Indian diamond merchant clan, diamond merchants are about the last who ought to lecture white Americans on their failures of inclusion and diversity.

The diamond business is globalist yet intensely nepotistic. I knew an American woman who got a job in the Los Angeles diamond district but then went to work for an insurance company due to discrimination against women and non-Indians.

Indians have recently pushed Orthodox Jewish diamond businessmen largely out of their stronghold in Antwerp, Belgium, in part by being more clannish than the Orthodox Jews.

The secret to the diamond business is arranged marriages and the threat of ostracism, as dawned on me while having the diamond ring appraised to make sure the retailer hadn’t cheated me. The appraiser on Wabash spent about 20 minutes squinting at it through a microscope before telling me about its microscopic flaws.

That’s a big transaction cost. It’s much more efficient to be able to trust somebody you are doing business with when he tells you orally that the diamond is flawless. But how do you trust him? Because if he gets a reputation for cheating his relatives, his children will never find spouses.

… But today it is the Mehtas and the Shahs rather than the Epsteins and Finkelszteins who rule Hoveniersstraat. Indians have come to control almost three-quarters of Antwerp’s diamond industry, a figure that had been associated with the Jews only a few decades ago.

… Three decades on, the Indian community in Antwerp consists of around 400 families, a majority from the single town of Palanpur in Gujarat.

There are three main ingredients to this Indian success story: cheap labour, large families and a willingness to work harder than the competition. …

“For us, sending rough diamonds to India for processing isn’t outsourcing as much as “homesourcing,” Santosh Kedia, owner of the jewelry company Indigems, quipped over lunch.

… Antwerp’s Indian diamantaires are almost without exception Jains and, given the religious restrictions on their diet, tend to import personal cooks from India who are familiar with their particular culinary needs.

Food taboos are an old way to head off fraternity with outsiders, much less intermarriage. Sharing a meal with somebody tends to lead toward greater sympathy, but if sharing a meal is impractical due to food taboos …

In China, I’d had the occasion to try to explain to a Chinese host the details of this diet in preparation for a dinner party where a few Jains would be in attendance. The Chinese already struggled with Indian pickiness when it came to food. Indians, especially upper caste/class ones, delineated their status by increasingly finicky choices: no meat, no garlic, no onions. Many, including most Jains, wouldn’t even tolerate a non-vegetarian in the kitchen. …

To the average Chinese for whom status was flagged by the ability to afford as large a variety of food, the meatier the better, such discriminations were deeply mystifying.

When I informed the Chinese host that his Jain guests were not only vegetarian but didn’t eat onions or indeed any kind of root vegetable at all, the gentleman in question gasped as if in the throes of a painful bout of indigestion. And I hadn’t even got to the part about the prohibition on green coloured vegetables on certain days of the religious calendar.

Happily tucking into that steaming-hot rajma in Antwerp, I’d wondered aloud about how difficult it must have been living in Belgium, given Jain dietary strictures. I could only imagine the apoplectic reaction of the typical Belgian waiter to a customer demanding a vegetarian meal, but one without any carrots, potatoes, garlic or onions.

Aditya Jasani, a sharply dressed youngster in his twenties, whose father had moved to Antwerp in the 1970s, shook his head. It wasn’t that bad, he’d said in his generic, international-school accent. “Many of us aren’t very strict anymore. Some people even eat eggs.”

I’d tried to look suitably impressed at this radical declaration. … What about the other reasons for the Gujarati’s success in Antwerp, I asked, steering the conversation back to where it had started.

“It’s our joint-families”, Kedia replied. Joint families refer to the convention of many family members living together in one house. But what Kedia meant was the propensity amongst Gujarati Jains to have large, closely-knit families.

Dilip Mehta, the CEO of Rosy Blue, an Antwerp-headquartered company that bills itself as the world’s largest diamond manufacturer, agreed, when I met him at his office on Hoveniersstraat later in the afternoon. “We always have the possibility of global distribution because a cousin or nephew who can blindly be trusted can always be sent to any country to set up operations,” he explained, leaning into a high-backed leather swivel chair.

That the Jews lacked similar extended families was a major disadvantage for them, in Mehta’s opinion. Given the global nature of the trade, he argued that it was necessary for successful diamantaires to have a reach that extended from the African countries where the diamond mines were located, to Antwerp where stones were traded, to India and increasingly China, where cutting and polishing was focused, and finally to the jewelry centers of the world like New York, Hong Kong, and Dubai. …

“We employ over 10,000 people globally, but a member of the Mehta family heads every operation,” he said, his eyes crinkling above his beak-like nose. …

How integrated into broader Belgian society were the Indians, I asked him. Did his kids go to Belgian school? Was there any inter-marrying? The Jains were a notoriously conservative community back in India, and I was curious about how the decades of living in Belgium had impacted their mores.

“I think our challenge is really to learn how to keep some distance between ourselves and the Belgians on the one hand, and learn from them on friendly terms, on the other,” opined Mehta. Most Indians lived in ghettos he’d said, because nothing in their education back home had equipped them to deal with living amongst Europeans. They avoided contact with locals because they were nervous about coming across as unmannered and incompetent. …

But what about the second generation who had been born and schooled in Antwerp? Mehta said most families sent their kids to English-speaking international schools, so that only a handful of youngsters had learnt Flemish, the variant of Dutch spoken in northern Belgium. Inter-marrying was almost unknown.

Aditya Jasani, the youngster I’d met at lunch earlier confirmed this. “Most of us still live like expats,” he’d said. “We have one foot here, but another foot in India. Belgium is for business only. It’s not our home.” …

The best-financed cricket club in Belgium, Blommaert revealed, was called the Antwerp Indians, whose members comprised the prosperous Gujarati diamond traders. But instead of using their resources to popularize the sport within the wider community, the Antwerp Indians didn’t permit anyone not of Indian origin to join their club. Clearly, promoting integration, even of the innocent sporting kind, was not a priority for them.

This is excerpted from New Old World: An Indian Journalist Discovers the Changing Face of Europe.