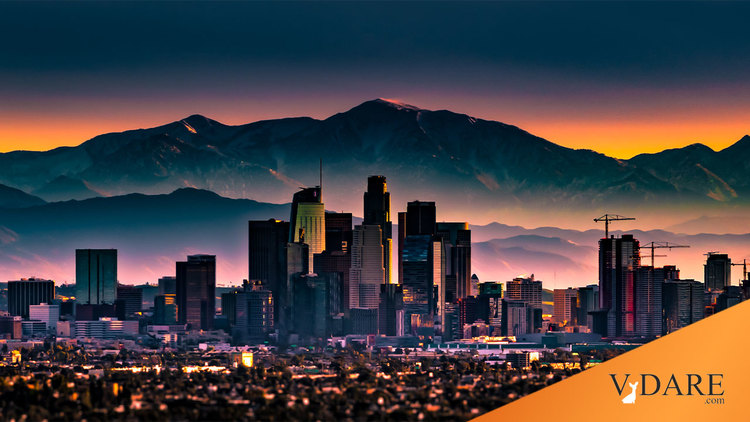 "The Future, Mr. Gittes, the Future"

THE CALIFORNIA DREAM IS DYING

The once-dynamic state is closing the door on economic opportunity.

About the author: Conor Friedersdorf is a California-based staff writer at The Atlantic, where he focuses on politics and national affairs. He is the founding editor of The Best of Journalism, a newsletter devoted to exceptional nonfiction.

Behold California, colossus of the West Coast: the most populous American state; the world’s fifth-largest economy; and arguably the most culturally influential, exporting Google searches and Instagram feeds and iPhones and Teslas and Netflix Originals and kimchi quesadillas. This place inspires awe. If I close my eyes I can see silhouettes of Joshua trees against a desert sunrise; seals playing in La Jolla’s craggy coves of sun-spangled, emerald seawater; fog rolling over the rugged Sonoma County coast at sunset into primeval groves of redwoods that John Steinbeck called “ambassadors from another time.”

I.e., the Past, not the Future. Some SoCal writers like the Future, such as Robert Heinlein, who stayed only from 1934-1946, though. Heinlein’s protege Ray Bradbury, I’m not so sure about.

This landscape is bejeweled with engineering feats: the California Aqueduct; the Golden Gate Bridge; and the ribbon of Pacific Coast Highway that stretches south of Monterey, clings to the cliffs of Big Sur, and descends the kelp-strewn Central Coast, where William Hearst built his Xanadu on a hillside where his zebras still graze. No dreamscape better inspires dreamers. Millions still immigrate to my beloved home to improve both their prospects and ours.

Yet I fear for California’s future. The generations that reaped the benefits of the postwar era in what was the most dynamic place in the world should be striving to ensure that future generations can pursue happiness as they did. Instead, they are poised to take the California Dream to their graves by betraying a promise the state has offered from the start.

I think Conor is mistaken in the appeal of Southern California to most Angelenos. It hasn’t been about the future since about 1974, it’s been more about preserving the past. As he writes, the conservative impulse has dominated for over a half century:

… The initial wave of community plans, around 1970, “dramatically rolled back density,” Morrow wrote, “from a planned population of 10 million people down to roughly 4.1 million.” Overnight, the city of Los Angeles planned for a future with 6 million fewer residents.

Angelenos want their part of Southern California to look like it did in Chinatown. I recall when first seeing Chinatown, a landmark 1974 movie set in 1937 that railed against progress, thinking, “Wow, L.A. before smog was beautiful.” By 1974, Angelenos like screenwriter Robert Towne were tired of the Future.

Not surprisingly, Southern California’s biggest accomplishment in recent decades has been rolling back smog to Chinatown levels. (By the 1990s, Towne in his introduction to a published version of his Chinatown script was more unsure that the Dead White Men who built Los Angeles into a great city, such as water engineer William Mulholland and the Otis-Chandler dynasty at the L.A. Times, were quite so bad as he had once depicted them: at minimum, they got big things done, which is becoming increasingly unlikely.)

I’ve lived on and off in L.A. since 1958. I figured out while I was still in high school that most people in Los Angeles think it was at its peak when they first can remember it, either as a small child or as a transplant.

Assisted by the countless movies filmed here, Los Angeles has a profoundly nostalgic culture. Nebraska-born director Alexander Payne (Election, Sideways) pointed out the the main appeal of living in L.A. (besides the weather) is the history:

You can trash living in Los Angeles or living in Hollywood, but I’m driving down the street and, oh look, there’s … the stairs that Laurel and Hardy carried the piano up in The Music Box. Now I’m in Los Feliz, there’s the house that was used in Double Indemnity.