The Fundamental Reason There's a "Refugee" Crisis in the Mediterranean 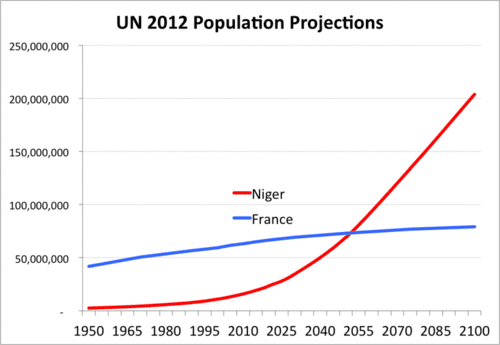 There’s an effort to make you assume that the Camp of the Saints mass migration going on from Africa to Europe is a temporary blip of “refugees” or “migrants” caused by the depredations of ISIS in Iraq and Syria or something like that. But the fundamental cause is far more long-term. Let’s take the Sahel country of Niger as an example:

Runaway birth rates are a disaster … Niger is, by the reckoning of the UN’s Human Development Index, the poorest place on earth. Most of its inhabitants eke out a living growing subsistence crops on small plots of dusty, infertile land. Despite this agricultural bias, the drought-stricken country cannot feed itself, even in good years. An estimated 2.5m people out of a total of 17m have no secure source of food. …

This perpetual food crisis is compounded by doggedly high fertility rates. With an average of 7.6 children per woman, Niger has the world’s highest rates.

Poverty, ignorance and poor access to contraception are contributing factors, as are cultural issues like competition between wives. Men in Niger tend to be polygamous, and local doctors note that their spouses often try to prove their value by outdoing each other in child births. This contributes to Niger having the highest population growth rate on earth. At current projections, the number of inhabitants will more than triple between now and 2050 to 55m.

Well, that boggling 55 million figure was the old forecast, which looks now like an underestimate because the government of Niger was unsurprisingly inadequate at counting all its people and all their births. Based on better data, the latest UN forecast, is for 69 million people in 2050 and 204 million in 2100.

…At present the United Nations Population Fund (UNFPA) is the only importer of contraceptives, flying in millions of dollars’ worth this year. It runs a “school for husbands” which teaches men, who traditionally tended to obstruct women seeking birth control, about family planning. The schools hope to dispel wild rumours about contraception.

I’ll have to post a passage one of these days from Waugh’s 1932 novel Black Mischief about the ill-fated Festival of Contraception sponsored by the Emperor of an Ethiopia-like country.

The political will to improve things is weak: the government professes support but allocates only a tiny proportion of its budget to family planning. And the appetite for change among the population is limited. Only about a quarter of women express any desire to space out their births, let alone reduce their number. More than 20 years ago Niger identified population control as a priority in the fight against poverty. But birth rates are still rising.

This is hardly an insoluble problem. The majority of countries in the world outside of sub-Saharan Africa have succeeded in bringing their fertility rates down to reasonably sustainable levels. But very little energy in the West has been devoted in recent decades to promoting family planning in Africa because that would be racist.