THE ECONOMIST: Muslims In Denmark Are A Life-Long Burden On The Budget 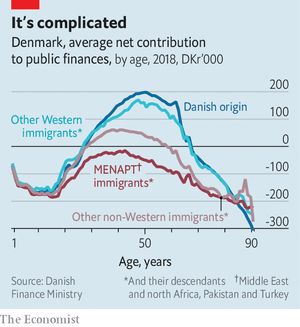 Judging from the dark blue line, Danes appear to be net tax contributors from their later 20s to their later 60s. They get very expensive in terms of tax consumption in their 80s because, I’m guessing, they less often have family taking care of them. People of Middle Eastern, North African, Pakistani, and Turkish descent (not just immigrants) come closest to paying more in taxes than they consume in services around age 42, but are never on average net contributors.

Why have Danes turned against immigration?

Many fear that refugees are a drain on their welfare state

Mjolnerparken, a housing project in Copenhagen’s multi-ethnic Norrebro district, is pleasantly landscaped and dotted with sports pitches. The only signs of anything amiss are banners hanging from white balconies bearing slogans like “I’ll never move”. By next autumn many of the 1,500 residents may have to. That is because Denmark’s government deems Mjolnerparken to be a “parallel society”. Too many of its residents are hard-up, or jobless, or poorly educated, or have criminal records and are of “non-Western” origin. To comply with its policy of breaking up what the government until recently called “ghettos”, Mjolnerparken’s owner is to sell two of the four apartment blocks to investors. Other citizens will move in.

This is one of a number of ways in which Denmark is trying to control where and how immigrants live. On December 1st its Social Democratic government enacted a law to prevent the formation of parallel societies by obliging local authorities to give preference in “prevention areas” to well-educated people with jobs when assigning housing.

Housing quotas are used in Singapore, Oak Park, IL and now Denmark, but are seldom discussed in the U.S. I could imagine Raj Chetty recommending them at some point, but so far he hasn’t as far as I know.

It is even keener to deter migrants from arriving in the first place. In March it was the first eu country to say it would send Syrians back to Syria, arguing that Damascus and its environs are now safe. Mette Frederiksen, Denmark’s prime minister, has set a goal of “zero asylum-seekers”. On December 13th a Danish court sentenced Inger Stoejberg, who was immigration minister in an earlier centre-right government, to 60 days in jail for ordering unlawfully that married asylum-seekers younger than 18 be housed separately from their spouses. She says the policy’s intent was to discourage child marriage. Anti-immigrant parties hail her as a martyr.

Denmark is hardly the only country to pull up the drawbridge. Europe suffered political convulsions after an influx of refugees in 2015; most governments are eager to avoid a repeat. But in some ways Denmark stands out. Unlike their counterparts in Hungary, say, its politicians do not denounce immigrants to distract attention from their own failings. Denmark differs from neighbouring Sweden, which in 2015 took in more Syrian asylum-seekers as a share of its population than any other European country except Turkey. Sweden “cherishes multiculturalism”, says Tina Gudrun Jensen, an anthropologist at Malmo University. “In Denmark multiculturalism is really a negative word.”

This approach is earning Danes a bad press. “Denmark leading the race to the bottom” ran a recent headline. But for some governments it is a role model. Mattias Tesfaye, the immigration and integration minister, said recently that he had just hosted a delegation from Greece and expected one from Austria. Britain has reportedly talked to Denmark about co-operating to process asylum applications in some faraway place such as Rwanda. Even Sweden is becoming more like its southern neighbour.

The Danish difference has deep roots. After the Danish crown lost the largely German-speaking duchies of Schleswig and Holstein to Prussia in 1864 it drew the lesson that the country must “stick together [and] be homogeneous”, says Ulf Hedetoft, a scholar of nationalism at the University of Copenhagen. …

I’m guessing that Denmark, unlike Sweden, not having anything to be feel guilty over in their World War II history helps today.

… Its policies included lengthening immigrants’ wait for permanent residency from three years to seven and ending schools’ obligation to teach in pupils’ mother tongues. To bolster Danishness it introduced “canons” of culture, history and democracy into the school curriculum. …

Note that Denmark has had a left of center government since 2019.

In Sweden, such sentiments are spreading; in Denmark they are now conventional wisdom. “The social democratic welfare state can only survive if we have migration under control,” says Mr Tesfaye, whose father was a refugee from Ethiopia. Denmark may be the world’s second-happiest country, according to a recent survey, but its happiness feels fragile.

Denmark’s defence of its welfare state is ruthless and, say critics, racist. In October the finance ministry, in its annual report on the issue, estimated that in 2018 immigrants from non-Western countries and their descendants drained from public finances a net 31bn kroner ($4.9bn), some 1.4% of gdp. Immigrants from Western countries, by contrast, contributed a net 7bn kroner (see chart). Data on immigration’s fiscal effects were what “changed the Social Democrats’ point of view”, says Torben Tranaes of the Danish Centre for Social Science Research.

Muslims are at the core of the issue. This year was the first time the ministry reported separately on the contributions by people from 24 Muslim countries. They account for 50% of the non-Westerners, but 77% of the drain. Alongside that worry are fears that Muslims bring notions about democracy and the role of women that Danes find threatening. Muslims are welcome, says Mr Tesfaye, but, “We can’t meet in the middle. It’s not half sharia and half the Danish constitution.”

To Muslim ears that sounds like bias. A law passed in 2018, aimed at conservative Muslims, obliges new citizens to shake hands with a municipal official in naturalisation ceremonies. Politicians “make you feel like you have to not celebrate Ramadan or Eid or anything”, says Agob Yacoub, a Syrian refugee. Other groups are not subject to such pressure. Chinese immigrants have not become culturally Danish but are nonetheless “extremely welcome”, notes Mr Hedetoft. The Muslims’ drain on the treasury probably has little to do with religion. More than half came as asylum-seekers or through family reunification, compared with 30% of other non-Westerners.