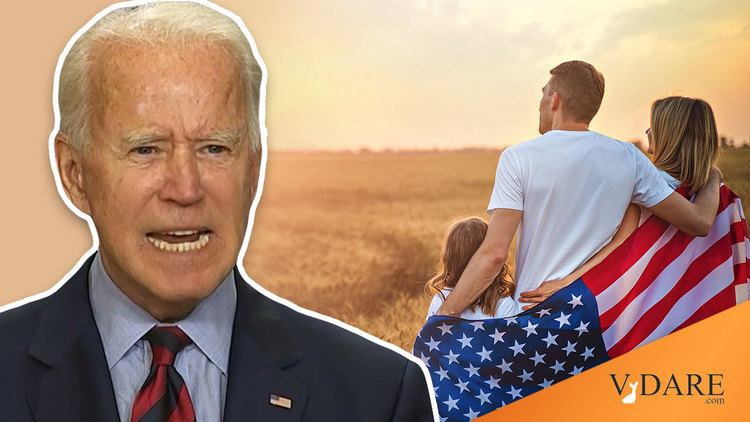 The Demonization Of Core Americans

From my current column in Taki’s Magazine:

The Demonization of Core Americans

Therefore, they blow elections, such as last week’s governor’s race in Virginia, by taking their own rationalizations for their schemes at face value. Ironically, the Democrats’ success at generating talking points for the press makes it hard for them to remember that their gambits are ruses rather than ethical imperatives. So they wind up taking their stances too far for their own electoral good.

For instance, inviting in foreigners to vote for your party is, when you stop and think about it, a sordid and shameless way to win national elections. Hence, Democrats hardly ever think about it other than to boast of it (except when Tucker Carlson drives them into sputtering rage by mentioning what they are up to). They much prefer to think about how their enemies deserve what’s coming to them.

So, the Democrats wind up committing own goals like Joe Biden condemning his Hispanic Border Patrol equestrian agents for trying to maintain order when overwhelmed by 15,000 Haitians crossing the Rio Grande. Of course, that’s not a smart way to flip Texas blue and thus assure themselves the White House forever. But Democrats tend to be so addicted to hate that they do stupid things like this.

Because Democrats dominate the respectable media, there’s seldom anybody to remind them—at least in between their occasional election setbacks—of the cynical origins of their beliefs. Granted, it’s pretty shameful that the Democrats try to get the rest of us to believe that importing ringers to vote for them is what America is all about, that egging on looters and murderers as Biden did on the second day of the Kenosha riots is justice, and that encouraging teenage girls to claim they are boys is health and sanity.