The DAILY BEAST And Our Tweet At The RNC: Leftists Heads DID Explode, And They ARE Clueless

When I was emailed a couple of pictures of one of our Tweets showing up in the crawl on the Cleveland Jumbotron, it was obvious what had happened: there's an #RNCinCLE official hashtag, and a staffer was pulling positive and inspirational Tweets off it. Since Tweets like this one ARE positive and inspirational (note the hashtag with the little elephant after it) we made the cut.

"The sleeping giant of the American spirit has awakened." - Henry McMaster #RNCinCLE

Not according to your anti-woman, anti-LGBT, anti-immigrant @GOP platform. #RNCinCLE https://t.co/I2W1cvyrrQ

Nor would anything overtly racist, sexist, or obscene. But I also thought, and wrote last night, that

It will be fun to see the SPLC’s head exploding, and them trying to “guilt-by-association”  Trump for something Sam Francis said in a speech before the SPLC staffers were born. I just imagine Trump  or his staff explaining slowly “It’s a Tweet. Off the Internet. Because of a Hashtag. Grow up!” 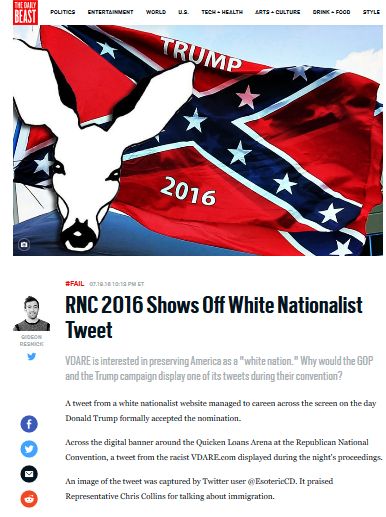 In the Daily Beast today, Gideon Resnick [Email him] wrote a  story which included links to the SPLC's anti-VDARE.com hate literature and included this:

"America was defined — almost explicitly, sometimes very explicitly — as a white nation, for white people, and what that means is that there is virtually no figure, no law, no policy, no event in the history of the old, white America that can survive the transition to the new and non-white version. Whether we will want to call the new updated version ‘America’ at all is another question entirely,” white nationalist writer Sam Francis wrote on VDARE in 2003.

VDARE is interested in preserving America as a "white nation." Why would the GOP and the Trump campaign display one of its tweets during their convention?

Almost exactly as I predicted! He wasn't using my idea, by the way, that's in the standard SPLC boilerplate. In any event, he's got the wrong quote. The one I was thinking of was the one from speech Sam Francis gave at the first American Renaissance conference, published in September 1994:

"The civilization that we as whites created in Europe and America could not have developed apart from the genetic endowments of the creating people, nor is there any reason to believe that the civilization can be successfully transmitted to a different people. "

That's also very popular. The answer to "Why would the GOP and the Trump campaign display"  one of  our  tweets  is “It’s a Tweet. Off the Internet. Because of a Hashtag. Grow up!”

The idea that a staffer running the Jumbotron ought to check  the  SPLC's list of people they hate before posting a Tweet quoting the man nominating Trump is crazy. It is, as I have written before, "shunning" behavior—the sign of a cult mentality.

Also puzzled by this "Internet" thing: