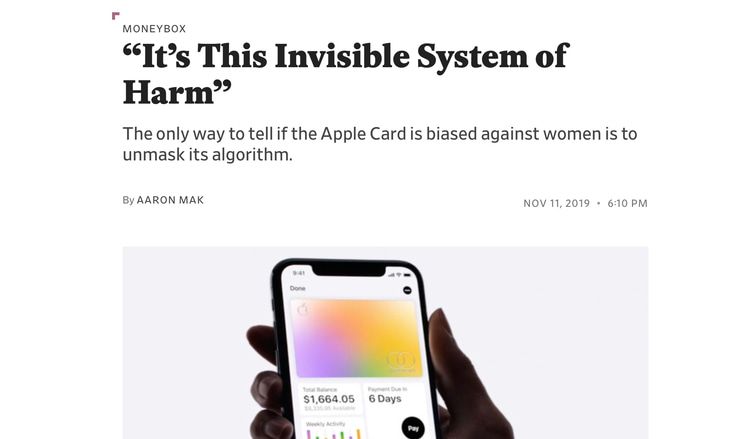 “It’s This Invisible System of Harm”
The only way to tell if the Apple Card is biased against women is to unmask its algorithm.
By AARON MAK

David Heinemeier Hansson, a well-known software engineer, posted a viral Twitter thread last week denouncing the Apple Card as sexist after its algorithm determined that he deserved a credit limit 20 times higher than his wife’s. In a blog post, his wife, Jamie Heinemeier Hansson, explained that there was no apparent reason for the discrepancy, writing, “I have had credit in the U.S. far longer than David. I have never had a single late payment. I do not have any debts. David and I share all financial accounts, and my very good credit score is higher than David’s.” Apple co-founder Steve Wozniak later revealed that the algorithm had given him a credit line 10 times higher than his wife’s, also for no apparent reason.

The thread sparked an uproar on Twitter over the weekend, and the New York State Department of Financial Services announced on Saturday that it was launching an investigation into the credit card program, which Apple operates jointly with Goldman Sachs. The department declared, “Financial services companies are responsible for ensuring the algorithms they use do not even unintentionally discriminate against protected groups.”

To understand how an algorithm could be systematically giving female Apple Card customers lower credit lines than men—and to discuss how the opacity of such algorithms often allows discrimination to persist—I spoke to Cathy O’Neil, a mathematician and the author of Weapons of Math Destruction: How Big Data Increases Inequality and Threatens Democracy.

When will American capitalists finally allow rich men’s wives to go as much into debt as they want?

That is the Crisis of Our Age.