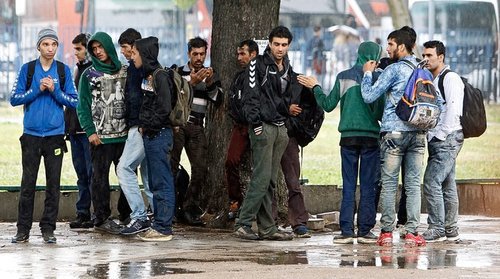 In Testy Debate, E.U. Leaders Fail to Agree on Quotas to Spread Migrants Across Bloc

BRUSSELS — Facing a migration crisis that has infused Europe’s usually arid and consensual decision-making with angry passions, European leaders ended an ill-tempered discussion early Friday about what to do with a vague pledge to spread 40,000 migrants around the Continent.

But they scrapped what had been the heart of a plan to share a burden now borne largely by Greece and Italy — a system of mandatory quotas to spread the tens of thousands of migrants, now in the two countries, across the European Union.

In recent weeks, standoffs with migrants at Europe’s internal borders have led to squabbling among governments and screaming headlines in newspapers, particularly in Britain, about trouble caused by desperate people seeking a better life.

Something needs to be done about newspapers, particularly in Britain, that compete for customers.

Migrants who enter the European Union in Italy and Greece often seek to reach — and are blocked from — preferred destinations farther north in Europe, where they hope for better job prospects and more generous government benefits.

Hundreds of migrants were camped out in recent weeks at a crossing between Italy and France, after French border officials denied them entry, and officials at the French port of Calais struggled once again this week to prevent surges of migrants from smuggling onto trucks bound for Britain that use the tunnel crossing the English Channel.

Even so, just hours after finance ministers representing 19 countries that use the euro again failed to break the deadlock between Greece and its creditors, European Union leaders killed proposals that would have forced each country to take a certain number of asylum seekers, opting for a voluntary program instead.

The mental universe evidenced by the phrase “Even so” in the previous sentence is a peculiar but apparently almost unquestioned one.

… The issue of migrants, which set off violent racist protests last weekend in Slovakia and has helped fuel extremist political groups across Europe, has laid bare a fundamental and explosive tension at the heart of the so-called European Project — a six-decade push for greater integration that aims for “ever closer union” but leaves intact the sovereign power of individual states on key issues like immigration.

Elizabeth Collett, director of the Migration Policy Institute Europe, a research group in Brussels, said Europe was caught in a “halfway house,” torn between a commitment to a Europe without border controls for Europeans and individual countries’ determination to control their own frontiers and manage their own national asylum systems.

It’s like you used to have an ocean liner with 28 sealable water-proof compartments to prevent sinking, but then you removed all the watertight doors in the name of convenience — after all, whoever heard of an iceberg in the Mediterranean? — so now if one compartment is breached, all are in risk of flooding.

In recent months, however, there has also been a surge of migrants along land routes through the Balkans to Hungary, which detected more than 50,000 migrants from January to the end of May, an increase of 880 percent over the same period last year.

Hungary has nonetheless been one of the strongest critics of attempts to forge a united response, with its prime minister, Victor Orban, declaring recently, “I don’t believe in a European solution.” Instead, he wants Hungary to build a 13-foot-high fence along its border with Serbia, which is not a member of the European Union but is a major transit route for migrants.

The highest priority of patriotic leaders in Eastern Europe should be to prevent the Chain Migration process from getting a toehold in their countries.