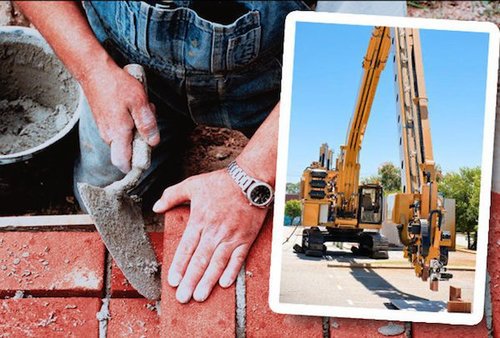 We see lots of photos of robots on factory floors, where the machines weld and assemble 24/7 with no coffee breaks. But construction workers shouldn’t think that their jobs are safe because they are outdoors and not as repetitious as some. New robots and techniques are being developed that are revolutionizing the construction process. One new skill being invented for robots’ metallic claws is bricklaying. (Above, the Hadrian bricklaying robot on the right is named for the famous wall.)

We can see a robot that looks like Sawyer working as a mason in the video following where it helps a human bricklayer in building barracks in Fort Lee Virginia. It doesn’t move very quickly, but then it doesn’t stop for lunch.

The robot bricklayer is just one example of the fundamental changes via automation that are occurring in the building sector of the jobs economy. In Amsterdam, a Dutch team is creating the world’s first 3-D printed house. The house is experimental, but the direction of building is clear — more machines and fewer humans, just like the rest of the economy.

One lesson to be gleaned is that America doesn’t need to import millions of low-skilled immigrants from the third world to build our houses and buildings.

Construction once supplied a decent living for blue-collar citizens, before elites engineered mass immigration to drive down wages. In 2003, house framer William Ennis described how his career was ruined: “I started out making $800 to $1,200 a week here for a 40-hour week. It got to where I was having to work seven days a week, 12 hours a day, just to make $600 a week. And that’s just in the past three or four years.”

A 2013 report from the Center for Immigration Studies found that 66 percent of construction workers were America born, which means that 34 percent were foreigners. Certainly the percentage in California is higher, judging from the Spanish one hears on work sites.

The purpose-built robot bricklayer comes from Australia. And its inventor says bricklaying is a job Australians don’t want to do any more. Right.

Robots have slowly integrated themselves into our modern lives and now do a lot of helpful things. However, one thing robots haven’t been able to do is lay bricks, due to the kind of labor involved.

In fact, bricklaying hasn’t changed in thousands of years: it’s still something done completely by hand. It’s backbreaking work, though, and often results in worker injuries.

However, an Australian engineer has a solution: a robot bricklayer that autonomously lays bricks faster than any human ever could. In fact, this robot can build a house in just two days.

The robot, called Hadrian (after Hadrian’s Wall), is the effort of 10 years of research and development by Mark Pivac, the engineer responsible for its invention. It works by using a 3D CAD design of a house to determine where every brick goes and then uses its software to cut and lay the bricks. It’s also efficient: Hadrian can do all this from the job site and lay the bricks once they’re measured and cut.

The fully-automated robot is even able to scan to use the CAD design to determine where bricks need to be measured and cut differently do to things like entryway points for pipes, electrical wires and phone lines.

In addition, unlike human workers, Hadrian can work 24 hours a day, seven days a week. It doesn’t require a vacation or sick time.

“We’re at a technological nexus where a few different technologies have got to the level where it’s now possible to do it, and that’s what we’ve done,” said Pivac to Perth Now.

However, Hadrian isn’t looking to replace an entire bricklaying workforce. The problem is that there is a steady decline in that workforce, meaning that there’s more need than ever for someone to do the bricklaying duties.

“We have absolutely nothing against bricklayers,” says Pivac. “The problem is the average age of bricklayers is going up and it’s difficult to attract new young people to the trade.”

Investment company DMY Capital Limited believes in Hadrian, so much so that the company agreed to acquire all rights to Hadrian, a project that’s already seen about $5.5 million dollars spent on it.