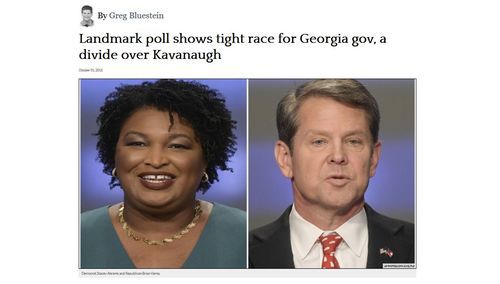 The Canvasser’s Tale: Kavanaugh May Be Helping GOP

Last weekend, I knocked on doors in Atlanta, Georgia, on behalf of white male Republican gubernatorial candidate Brian Kemp. His Democratic opponent simply must be stopped: Stacey Abrams, a “progressive” black woman who wants the famous Stone Mountain reliefs of Confederate Generals destroyed, along with any other commemoration of the Confederacy ["Abrams calls for removal of Confederate faces off Stone Mountain," by Greg Bluestein, Atlanta Journal-Constitution, August 15, 2017]. Abrams is also the kind of “gun-grabber” not typically found in the Deep South, with a lengthy page on her campaign website about “Gun Safety” ["Can Gun Control Win in Georgia?" by Charles Bethea, The New Yorker, August 21, 2018]. And I know everything I need to know about what happens when blacks are in charge from Detroit, Haiti, South Africa, etc.

My news for VDARE.com readers: quite a few people I spoke to expressed disgust about the Democrats’ obstruction of Brett Kavanaugh’s Supreme Court nomination.

Of course, this actually has nothing to do with the race I am canvassing for. Georgia’s gubernatorial race will have exactly zero impact on Kavanaugh’s fate. Regardless, it is making people angry, and angry people love to vote.

This reaction is particularly consequential in this Georgia race because Kemp is a Tea Party candidate who defeated a milquetoast Republican, Casey Cagle, in the primary. The fear since Kemp’s triumph: “moderate” Republicans, typically yuppies in the wealthy areas in and around Atlanta, who do not like President Trump or any of his regional surrogates (e.g. Kemp), would stay home this round.

(Indeed, a few  people I canvassed did ask that I inform the Kemp campaign that their  ads of him showily wielding a firearm are an embarrassment—but that they’re voting for him anyway!)

But Kavanaugh seems to be closing this enthusiasm gap. I am canvassing in a wealthy Atlanta neighborhood, and Kavanaugh is the topic that keep coming up.

It is foolish to read too much into anecdotes, but we learned in 2016 that it is equally foolish not to read into anecdotes at all. Recent polling backs up my conversations. Quinnipiac shows congressional races across the country tightening [“House GOP candidates narrow Democrats' lead in new poll,” by Naomi Lim, Washington Examiner, October 2, 2018].

Noteworthy as well: many prominent #NeverTrump Republican talking heads are defending Kavanaugh with everything they’ve got: Erick Erickson, Ben Shapiro, the editors of The Weekly Standard, et al.

And since Republicans are more united on Kavanaugh than on Trump, this may actually be a good thing.