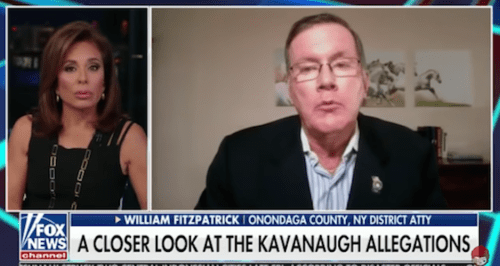 Very few people on news programs are covering the fallibility of memory as an important aspect of the accusation of sexual assault coming from Christine Blasey Ford against Supreme Court nominee Brett Kavanaugh.

Ford claims to have “recovered” the memory of assault during a therapist session in 2012, but details of that meeting remain strangely secret while important questions of that encounter go mostly unasked, such as whether hypnosis used to derive the alleged recollection. In many states, testimony obtained via hypnosis is not allowed in court because of its lack of veracity.

Memory is remarkably susceptible to suggestion and outside influences, and is not the mental version of a recording device. Yet official Washington and most media are stuck on the He Said, She Said narrative about the Kavanaugh debate because it is simple and sets up well as an antagonistic scenario for the press to present.

A recent report noted that Ford co-authored a study about the use of hypnosis to retrieve memories that was published in 2008, which indicates her familiarity and positive regard toward the practice.

Helpfully, Judge Jeanine Pirro of Fox News examined the topic recently when she interviewed a district attorney familiar with the use of hypnosis.

You may find yourself asking how someone could make accusations about another person nearly 40 years ago- without any evidence or corroboration? District Attorney Bill Fitzpatrick is an expert and here to discuss. pic.twitter.com/rC27N5VZ22

JUDGE JEANINE PIRRO: Over the past week or two, you may have found yourself asking questions about how someone can make an accusation about another person over an incident nearly 40 years ago without any evidence or corroboration.

I brought in an expert to talk about the Kavanaugh case and I am joined now via Skype by Onondaga New York District Attorney, former President of the National DA Association and a dear friend of mine for many years when were DAs together, all right, Billy, would I be correct and we don’t have a lot of time in assuming that you and your office have interviewed and prosecuted tens of thousands, if not more sex crimes victims.

PIRRO: Okay, good. Now, you watched the testimony of Christine Blasey Ford, would you have filed charges on her behalf?

FITZPATRICK: No, no ethical prosecutor could possibly bring a case because of the lack of specificity as to the time, date and location and the defendant is entitled to know all of those things by constitutional law.

FITZPATRICK: Well, I happen to be very fond of Rachel and I’m very, very close friends with her boss. But with that said, what I would have focused on would be the visit to the therapist in 2012 by Dr. Ford.

People are struggling with this conundrum, Judge, how can two people be so credible when one of them demonstrably has to be lying. The answer may very well be that neither one of them are lying. That what happened in that therapist office is that a memory was recovered by some means, possibly hypnosis as you suggested in your Opening Statement and that makes it absolutely inadmissible both in the state of New York and in the state of Maryland and then, frankly, most of states in the union.

The reason being, that hypnosis can often cause confabulation, the creation of a false memory that the affiant, the declarant, the victim firmly believes is true. Now, you and I both agree, something happened to Dr. Ford. We can’t say when it happened. But I was very, very troubled by not pinpointing how is it that she is able to identify Brett Kavanaugh as her attacker.

PIRRO: And now that she has done it, and the resistance on the part of the attorneys to allow the Senate to look at the notes with the therapist, the lie detector test before everything was revealed gives me the sense that there was a whole plan here. I don’t have you on to discuss that, but more the reality that there are people out there who are honest in their claims but just can’t be specific enough.

FITZPATRICK: Yes, I mean, I prosecuted the lead case in New York 35 years ago. A woman was brutally raped. For months and months, we were so frustrated, she couldn’t identify her assailant. We finally went to hypnosis and she was able to identify her assailant and he was convicted and that case was reversed. Fortunately, he was convicted again, but the Court of Appeals said, look, it’s just not reliable. You can’t cross-examine someone effectively who absolutely believes they are telling the truth and that’s only as a result of false memory that was created by hypnosis.

PIRRO: And you think that that is a probability here?

FITZPATRICK: I think it’s a good possibility. I would be much more suspicious and much more favorable to that possibility if the lawyers for Dr. Ford not agree to release those therapist notes. At the very least, they should be given to a third party to neutrally examine.

PIRRO: Bill Fitzpatrick, DA, thanks so much. We’ll be right back.

For more about the fallibility of recollection, fake memory expert Elizabeth Loftus is top notch and was reported in my blog, Was Kavanaugh’s Accuser Unduly Influenced during Therapy?.

It is surprising in a bad way that she has not appeared on any televised news program despite the wall-to-wall coverage about the Supreme Court controversy. A September 23 podcast from John Ziegler with Loftus is a rare interview on the important subject of false memory in the current context.