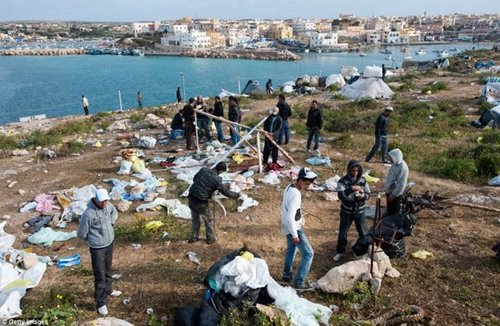 The Camp of the Saints in Italy

From The Spectator (UK):

Welcome to Italy: this is what a real immigration crisis looks like...

… In October 2013, Italy’s previous unelected government, which like the current one was left-wing, ordered the Italian navy to search for and rescue all boat people in the Sicilian channel and beyond. …

The same left-wing Italian government also took the extraordinary step of decriminalising illegal immigration, which means among other things that none of the boat people are arrested once on dry land. Instead, they are taken to ‘Centri di accoglienza’ (welcome centres) for identification and a decision on their destinies. In theory, only those who identify themselves and claim political asylum can remain in Italy until their application is refused — or, if it is accepted, indefinitely. And in theory, under the Dublin Accords, they can only claim political asylum in Italy — the country where they arrived in the EU. In practice, however, only a minority claim political asylum in Italy. Pretty well all of them remain there incognito, or else move on to other EU countries.

Here’s how it works. In the welcome centres, they are given free board and lodging plus mobile phones, €3 a day in pocket money, and lessons — if they can be bothered — in such things as ice-cream-making or driving a car and (I nearly forgot) Italian. Their presence in these welcome centres is voluntary and they are free to come and go, though not to work, and each of them costs those Italians who do pay tax €35 a day (nearly €13,000 a year). Yes, they are supposed to have their photographs and fingerprints taken, but many refuse and the Italian police, it seems, do not insist. …

This year, there is space for just 75,000 migrants in such places. Hotels are filling the breach, including the four-star Kulm hotel perched high above the luxury resort of Portofino on the Ligurian coast. But most of the rescued migrants could not care less about all that jazz and have just disappeared.

The ones who stay long in the welcome centres are those who have revealed their identities in order to apply for political asylum in Italy. Last year, 64,900 migrants did so in Italy — roughly a third of those saved by the Italian navy. But this being Italy, the judicial system only had time to reach a decision on half those applications (accepting 60 per cent of them), and anyway, thanks to the byzantine Italian appeals procedure, those refused asylum can remain for years. Even if their asylum claim is finally rejected and by some cruel quirk of fate they are actually handed a deportation order, it is easily ignored: last year Italy forcibly deported just 6,944 people — a figure set to shrink even more once a law before parliament is passed banning deportation to countries where human rights are abused.

Fair enough, you might say, if all the asylum seekers were genuine refugees from war zones. But contrary to the impression given by most of the world’s media, hardly any of 2014’s intake were from war-torn countries such as Syria or Iraq (though it is true that the number of Syrians is now rising).

Last year, most were from sub-Saharan Africa. Top of the league table were the Nigerians, followed by the Malians and the Gambians, the Senegalese and even the Pakistanis — who together made up 70 per cent of the total. No doubt these countries are no picnic to live in, and parts of some of them are war zones, but that should not, and in theory does not, guarantee refugee status. It is also a fact that most boat people are young single men and the price of a ticket on a people-smuggling boat is €2,000 (nearly two years’ pay for the average worker in Mali).

Also, let me add that even genuine refugees are often fleeing their home countries because they fear retribution for the very bad things they did to their fellow nationals.

It’s worth remembering here that the majority of the boat people are Muslims and reports suggest that a small number are Islamic terrorists. The terrorists of ISIS are, we know from their Twitter feeds, obsessed with taking their crusade to Rome. One of those arrested in connection with the Islamic terrorist attack on the Bardo National Museum of Tunis in March had crossed the Mediterranean from Libya to Italy in a migrant boat in February.

Many refugees have no intention of staying in Italy, which is hardly surprising. For a start, only people who lose a full-time job are entitled to unemployment benefit. Italy, thanks to the straitjacket of the single currency, has been mired in recession for most of the past six years, with an official unemployment rate of 13 per cent (the real rate is probably 20 per cent) and the youth unemployment rate at a staggering 43 per cent.

The government of Matteo Renzi — the man billed as the Latin left’s answer to Tony Blair — seems happy to ferry into Italy a vast army of migrants with no real idea what to do with them except hope that they move on to other EU countries. The Italian premier has also been quick to champion the Euro-luvvie definition of this as a ‘European’ and not an ‘Italian’ crisis. So as of spring 2015, the ferry service is now operated not just by the Italian navy in the Sicilian channel but across the entire Mediterranean by the navies of many other EU countries, including the Royal Navy. This year, they have brought 54,000 boat people into Italy and a further 48,000 into Greece, and the summer migration season is not even in full swing yet.

Recently, Nick Cooke-Priest, captain of the British vessel involved in the rescue mission, HMS Bulwark, told reporters that ‘the indications are that there are 450,000 to 500,000 migrants in Libya who are waiting’ to reach Italy. …

So huge are the numbers that Italian police often just dump coach loads of migrants in town squares or at main railway stations which are then turned into temporary camps. Government policy is to try and spread the migrants out throughout the peninsula to lessen their impact; but now many regional and town councils (of all political persuasions), especially in the north, are in open revolt and refusing to take any more. Scabies is rife (of 46,000 migrants tested this year, 4,700 were infested) and one in four migrants is said by doctors to have Hepatitis C. The anti-immigration vote is rocketing and the Italian left has taken a hammering in the recent regional and city elections.

The EU — urged on in particular by an increasingly desperate Italy and Greece — is trying to draw up a quota deal to distribute the huge migrant army; but as with the single currency, when push comes to shove, it is every nation for itself. …

The French have ‘closed’ their border with Italy on the Côte d’Azur in defiance of the Schengen Agreement, which guarantees free movement within member nations. They are rigorously checking trains, cars and even footpaths across the mountains, and sending any illegal migrants back to Italy; they say they have sent back 6,000 this year. The justification is simple: the Italians are failing to identify these people and distinguish economic migrants from refugees. Who can argue with that? The Austrians are doing the same at the Brenner Pass in the Alps.

Pope Francis said last month that leaving the boat people to drown (about 3,500 are known to have died last year, and already nearly 2,000 this year) is ‘an attack against life’ akin to abortion. All of us feel it to be our moral duty to save lives where we can. Yet it cannot be our moral duty to ferry such vast numbers across the Mediterranean into Italy and Europe for ever, unless they are genuine refugees. …

Prime Minister Renzi tried to pretend that the migrant crisis did not exist, but now that it has turned into an emergency he can remain silent no longer. He blames other EU countries for putting the nation before the union — in this latest meltdown of EU collective responsibility — and the British and the French in particular for getting rid of Muammar Gaddafi and turning Libya into a failed state. When Gaddafi was in power, thanks to a deal struck with Berlusconi, who like Blair had an excellent rapport with the Colonel, the number of boat people slowed to a trickle.

Berlusconi and Qaffaffee are gone, but Hillary is still here. Of course, will anybody ever ask Hillary is she anticipated she was destroying Italy when she demanded the U.S. start a war with the government of Libya in 2011?

Of course, Renzi plans to take all of Europe down with Italy:

Signor Renzi now threatens his EU partners with what he calls ‘Plan B’ but refuses to reveal the details. It is thought to involve, among other things, refusing the EU fleet permission to land rescued migrants in Italy, and giving all migrants already here temporary leave-to-remain cards — in order to fox the French and flood Europe with them. That’ll teach them. The Italians call Renzi ‘Il Rottamatore’ (the Demolition Man) because of his vow to reform Italy root and branch. The nickname may end up being more apt than anybody realised.

Nicholas Farrell is the author of Mussolini: A New Life .