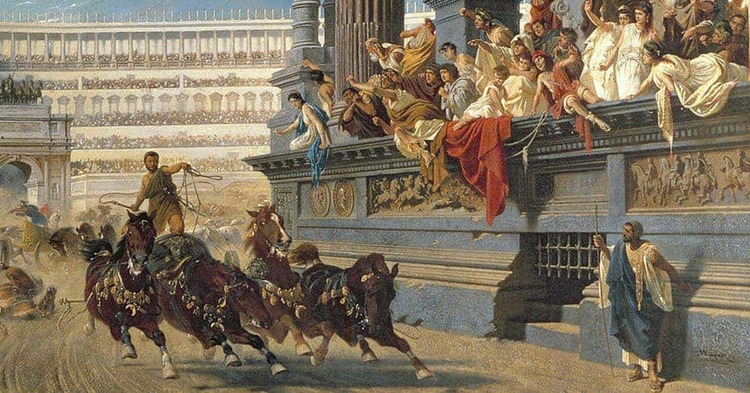 The Blues and the Greens: The Carnage In Kiev And The Constantinople Riots Of 532 AD

The carnage in Kiev is vaguely reminiscent of the great riots of 532 AD in Constantinople that began at the chariot races when the rival fan clubs, the brawling followers of the Blue and Green racing teams, joined forces and turned on Emperor Justinian the Great. It is perhaps trivializing of the issues at stake in Kiev to point out this connection with Constantinople (which, by the way, converted the Kievan Rus to Orthodoxy in 969), but this famous story is worth recalling in its own right.

For some reason, this tale is peculiarly appealing to science fiction authors. (The influence of Edward Gibbon's The Decline and Fall of the Roman Empire on sci-fi writers would be an interesting topic: e.g., Isaac Asimov's Foundation series is obviously inspired by Gibbon.)

For most of the 20th Century, historians assumed that the Blues and the Greens of Byzantine Constantinople weren't really just sports fans, but represented the upper class versus the lower class or the religiously orthodox versus the heretical or some neighborhoods versus some other neighborhoods. After all, nobody would get that worked up over sports, would they?

But in the 1970s, historian Alan Cameron, referencing the soccer hooligans of his own day, argued that we shouldn't overlook how important sports were in the Byzantine Empire to young men: "The truth is (of course) that Blues hated the Greens, not because they were lower-class or heretics—but simply because they were Greens."

But that raises the question of whether sports rivalries can be uncorrelated with other subdivisions of society. Generally, sports rivalries in the modern world correlate with all sorts of demographic traits because they are territorial: teams have their home fields, which tend to attract local fans.

However, the home turf of both the Greens and the Blues was the vast hippodrome in downtown Constantinople.

A vague modern analog might be the NBA's Los Angeles Lakers and Clippers, who have both played in the Staples Center in downtown Los Angeles for the last 15 years.

Traditionally, the Lakers are more successful and more popular, especially with movie stars, but it's not particularly clear that fans of the Lakers or Clippers represent different neighborhoods or classes or ethnicities. The Lakers tend to appeal to Angelenos who like winners anddon't mind spending money to associate themselves with winners (i.e., most of them) , while I presume the Clippers appeal to the budget-conscious (the Clippers charge about half as much as the Lakers for the same seat) and those who like underdogs. A marketing plan for the Clips speculates:

The Clippers' current fan base is of a low income bracket, probably young and from out of town, doesn not want to be seen as a bandwagoner, prefers to avoid the mainstream teams and is hoping the Clippers will write a Cinderella story.

On the other hand, the Lakers v. Clippers rivalry is low intensity by the standards of Chicago Cubs v. Chicago White Sox, much less Rangers v. Celtic in Glasgow. One reason for this is the lack of success of the Clippers hasn't generated much loyalty toward them.

Another is that Southern California hasn't been conducive to local sports animosities — only USC v. UCLA in football generates much heat. Los Angeles Dodger baseball fans, for instance, often root for the Anaheim Angels if they are winning and vaguely wish them well when they aren't. In general, as James Q. Wilson noted after moving from L.A. to Boston in the 1940s to attend Harvard, Angelenos don't have turf, they have cars.

Finally, since enthusiasm (such as it is) for the Clippers has been distributed less regionally or ethnically than psychologically, with the Clippers appealing to random frugal eccentrics, there's not much this rivalry does to tap into human territoriality.

On the other hand, it's hard for me to fathom how the Blues and Greens couldn't come to be correlated with other factors such as class or neighborhood.

Constantinople adopted the follies, though not the virtues, of ancient Rome; and the same factions which had agitated the circus, raged with redoubled fury in the hippodrome. ...

Insolent with royal favor, the blues affected to strike terror by a peculiar and Barbaric dress, the long hair of the Huns, their close sleeves and ample garments, a lofty step, and a sonorous voice. In the day they concealed their two-edged poniards, but in the night they boldly assembled in arms, and in numerous bands, prepared for every act of violence and rapine. Their adversaries of the green faction, or even inoffensive citizens, were stripped and often murdered by these nocturnal robbers ...

The first edict of Justinian, which was often repeated, and sometimes executed, announced his firm resolution to support the innocent, and to chastise the guilty, of every denomination and colour. Yet the balance of justice was still inclined in favour of the blue faction, by the secret affection, the habits, and the fears of the emperor; his equity, after an apparent struggle, submitted, without reluctance, to the implacable passions of Theodora, and the empress never forgot, or forgave, the injuries of the comedian. ...

As a poor child, the family of the future Empress Theodora was scorned by the Greens but treated well by the Blues.

A sedition, which almost laid Constantinople in ashes, was excited by the mutual hatred and momentary reconciliation of the two factions. In the fifth year of his reign, Justinian celebrated the festival of the ides of January; the games were incessantly disturbed by the clamorous discontent of the greens:...

At this dangerous moment, seven notorious assassins of both factions, who had been condemned by the praefect, were carried round the city, and afterwards transported to the place of execution in the suburb of Pera. Four were immediately beheaded; a fifth was hanged: but when the same punishment was inflicted on the remaining two, the rope broke, they fell alive to the ground, the populace applauded their escape... (51)

As one of these criminals was of the blue, and the other of the green livery, the two factions were equally provoked by the cruelty of their oppressor, or the ingratitude of their patron; and a short truce was concluded till they had delivered their prisoners and satisfied their revenge. The palace of the praefect, who withstood the seditious torrent, was instantly burnt, his officers and guards were massacred, the prisons were forced open, and freedom was restored to those who could only use it for the public destruction. A military force, which had been despatched to the aid of the civil magistrate, was fiercely encountered by an armed multitude, whose numbers and boldness continually increased ... The conflagration involved the cathedral of St. Sophia ...

Thus was destroyed the predecessor of the great St. Sophia cathedralthat was built five years later in 537 AD.

From such scenes of horror and distress, the wise and wealthy citizens escaped over the Bosphorus to the Asiatic side; and during five days Constantinople was abandoned to the factions, whose watchword, NIKA, vanquish! has given a name to this memorable sedition. (52)

... They agreed to censure the corrupt management of justice and the finance; and the two responsible ministers, the artful Tribonian, and the rapacious John of Cappadocia, were loudly arraigned as the authors of the public misery. The peaceful murmurs of the people would have been disregarded: they were heard with respect when the city was in flames; the quaestor, and the praefect, were instantly removed, and their offices were filled by two senators of blameless integrity. After this popular concession, Justinian proceeded to the hippodrome to confess his own errors, and to accept the repentance of his grateful subjects; but they distrusted his assurances, though solemnly pronounced in the presence of the holy Gospels; and the emperor, alarmed by their distrust, retreated with precipitation to the strong fortress of the palace. The obstinacy of the tumult was now imputed to a secret and ambitious conspiracy, and a suspicion was entertained, that the insurgents, more especially the green faction, had been supplied with arms and money by Hypatius and Pompey, two patricians, who could neither forget with honor, nor remember with safety, that they were the nephews of the emperor Anastasius.

... If the usurper [Hypatius], who afterwards pleaded the merit of his delay, had complied with the advice of his senate, and urged the fury of the multitude, their first irresistible effort might have oppressed or expelled his trembling competitor [Justinian]. The Byzantine palace enjoyed a free communication with the sea; vessels lay ready at the garden stairs; and a secret resolution was already formed, to convey the emperor with his family and treasures to a safe retreat, at some distance from the capital.

Justinian was lost, if the prostitute whom he raised from the theatre had not renounced the timidity, as well as the virtues, of her sex. In the midst of a council, where [General] Belisarius was present, Theodora alone displayed the spirit of a hero; and she alone, without apprehending his future hatred, could save the emperor from the imminent danger, and his unworthy fears.

"If flight," said the consort of Justinian, "were the only means of safety, yet I should disdain to fly. Death is the condition of our birth; but they who have reigned should never survive the loss of dignity and dominion. I implore Heaven, that I may never be seen, not a day, without my diadem and purple; that I may no longer behold the light, when I cease to be saluted with the name of queen. If you resolve, O Caesar! to fly, you have treasures; behold the sea, you have ships; but tremble lest the desire of life should expose you to wretched exile and ignominious death. For my own part, I adhere to the maxim of antiquity, that the throne is a glorious sepulchre."

The firmness of a woman restored the courage to deliberate and act, and courage soon discovers the resources of the most desperate situation. It was an easy and a decisive measure to revive the animosity of the factions; the blues were astonished at their own guilt and folly, that a trifling injury should provoke them to conspire with their implacable enemies against a gracious and liberal benefactor; they again proclaimed the majesty of Justinian; and the greens, with their upstart emperor, were left alone in the hippodrome.

The fidelity of the guards was doubtful; but the military force of Justinian consisted in three thousand veterans, who had been trained to valour and discipline in the Persian and Illyrian wars. Under the command of Belisarius and Mundus, they silently marched in two divisions from the palace, forced their obscure way through narrow passages, expiring flames, and falling edifices, and burst open at the same moment the two opposite gates of the hippodrome. In this narrow space, the disorderly and affrighted crowd was incapable of resisting on either side a firm and regular attack; the blues signalized the fury of their repentance; and it is computed, that above thirty thousand persons were slain in the merciless and promiscuous carnage of the day.