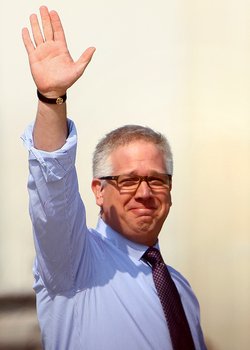 The Onion's attack on Glenn Beck mentioned below [Nation Once Again Comes Under Sway Of Pink-Faced Half-Wit, blah, blah, blah] is meant to position Glenn Beck as a neo-Fascist, the next Buzz Windrip or Lonesome Rhodes. Thus it's illustrated with a picture of Beck apparently giving a Fascist or Nazi salute.

There's nothing that can be done about this—it is literally impossible for a public figure not to be photographed in that position. See the photograph of the President receiving an honorary degree below.