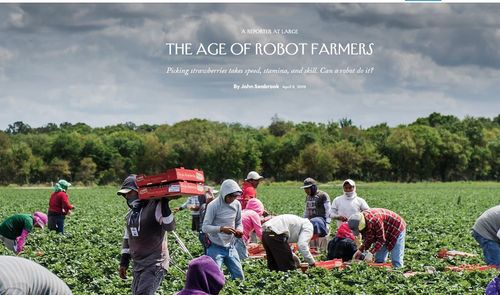 The Automated Farm Is Getting Closer

The recent New Yorker Magazine has a thorough story about automated agriculture, with strawberry picking getting particular attention. The magazine does like its articles long and rambling, so the reader learns about assorted agro-facts like grower complaints about the H-2A visa, the manual skills required to pick delicate strawberries (“a wristy twist that prevents bruising around the calyx”) and even some background on the general history of modern farming:

Picking strawberries takes speed, stamina, and skill. Can a robot do it?

[. . .] At the beginning of the twentieth century, about a third of the U.S. population lived on farms; today, less than one per cent does. Mechanization brought tractors and combine harvesters, which were initially used for grains, such as wheat, rye, oats, and barley. They automated the manual labor formerly done by small armies of threshers and bundlers. Mechanical harvesters made industrial farming possible, and led to the consolidation of small family acreages into the megafarms that dominate U.S. agriculture today.

The author opines that the hundreds of thousands of new illegal aliens from Central America won’t be interested in doing farm work because they have better things in mind. Good luck with that:

Migrants coming more recently from Central America, many of them also looking for better jobs and opportunities for their families, and often fleeing violence in their home countries, haven’t traditionally entered the crop-farm workforce in enough numbers to compensate for the loss of those Mexican workers—they’ve instead found jobs at meatpacking plants and in the service industries.

However, this article examines automation, and the farmers want smart machines that will reliably do the jobs so they needn’t worry about finding foreign workers when crops need picking. In fact, the strawberry grower featured, Gary Wishnatzki, helped raise investment money to develop the machines that will free him from depending on humans, and other growers have joined him. The technology people are happy to oblige — it’s a win-win for both.

The tech keeps improving, as suggested by a look at the new gadgets coming online. The upshot is that low-skilled workers will be replaced by robots when the machines become cheaper to use than humans. So it is crazy for Washington to continue admitting a hundred thousand menial laborers per month from Central America — the United States is not the welfare office for the Third World; it is the home of citizens.

And anyway, the US needs skilled workers, not backward rustics.

Continuing with a slice of the article:

All these prototypes rely on a handful of converging technologies—artificial intelligence, robotics, big data, G.P.S., machine vision, drones, and material science—that have been slowly finding their way onto the farm. Many row-crop farmers in the U.S. employ G.P.S.-guided tractors to lay out their fields. John Deere has been offering G.P.S. for its tractors since 1997. At first, satellite-assisted steering was simply a way for a farmer to keeps his rows straight, rather than rely on a tractor driver’s dead-reckoning skills. But for forward-thinking farmers G.P.S. offers much more than straight lines. A G.P.S.-planted farm provides a foundation on which to build a whole new class of automated farm tools that can use artificial intelligence to solve the hard problems that twentieth-century agricultural automation could not. 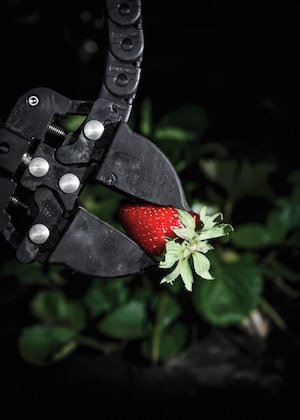 To get an idea of what might be possible, I arranged to visit Professor David Slaughter in his office at the University of California at Davis. Slaughter leads the university’s Smart Farm Initiative, which explores how future farmers might employ emerging technologies. Drones, for example, can automate the inspection of fields for pest or weed outbreaks, and can use high-resolution cameras and algorithmic processing of the images to pick up incipient problems before a farmer or a hired hand might spot them. Another possible application is plant breeding. Breeders currently rely on humans to evaluate seedlings produced by new combinations of already existing varieties. At a large operation, such as the University of Florida’s strawberry-breeding program, which is run by Vance Whitaker, people must manually inspect thousands of seedlings each year to see if any carries the desirable traits that the breeder is looking for. A robot, equipped with machine vision and enough artificial intelligence to recognize the traits the breeder is seeking, could automate the laborious process.

Slaughter showed me a prototype of a robotic weeding machine in the engineering department’s lab. His students built it and trained it to weed a field of tomato plants, each of which has its own G.P.S. coördinates. Because the robot knows exactly where the tomato plants are and has the machine vision and intelligence to know the difference between a tomato plant and a weed, it can navigate around the tomatoes and kill the weeds either with a miniature hoe or with a micro-jet of herbicide, which Slaughter described as “an inkjet printer for agriculture.” The farmer saves the cost of weeding the field by hand, and spares it a coating of herbicide that many of the tomato plants might not need. It was the nearest thing I saw in what venture capitalists call “digital agriculture” to a Roomba, the indoor robotic vacuum cleaner—a Farmba, maybe?

Summarizing the potential, Slaughter said, “For the first time, farmers can know what’s going on in their fields on the level of the individual plant. The idea is that you can run a farm with the same intimate care you would use on a back-yard garden, where you know each plant individually.” Farmers could irrigate and fertilize only those plants that needed it, and not waste resources on the current one-size-fits-all approach. Agriculture accounts for seventy per cent of fresh-water consumption worldwide, and, in the U.S. alone, farms use more than a billion pounds of pesticide each year; strawberry farms are especially heavy users. “Precision agriculture,” the name given to this slowly unfolding revolution, could dramatically reduce such wasteful and chemical-dependent practices.

Selective-harvesting machines are another application of smart-farm technology. But as a practical matter a farmer would need a different harvesting machine for each crop. As Slaughter’s colleague Stavros Vougioukas, an associate professor with the department of biological and agricultural engineering at U.C. Davis, pointed out, “building a machine to harvest watermelons is totally different from building a machine to harvest apples.” This is not the case with commodity-crop combines: the same machine can be adapted to harvest different crops. The capital investment required to develop the machine also has to make sense economically, and only a few specialty crops have a high enough value to justify a large outlay of funds. (For example, the harvest of peaches, a small-market crop that requires delicate handling, is unlikely to be automated anytime soon, if ever.) Vougioukas ticked them off: “Apples, citrus, strawberries, leafy greens, grapes”—those are the five big enough to justify automation.

So far, Berry 5.1 has cost nearly ten million dollars to develop; Wishnatzki raised most of the money from investors, many of whom were other strawberry growers, including the industry giant Driscoll. “My closest competitors realize we’re all in the same boat,” he told me. . .