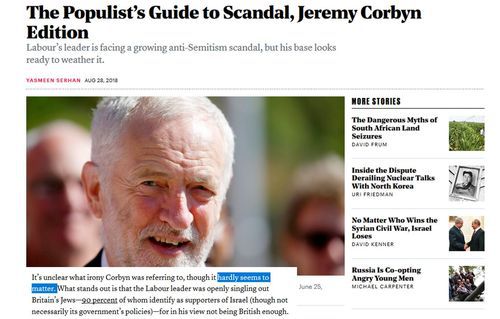 From Jeffrey Goldberg’s The Atlantic, more hyperventilation on the Jeremy Corbyn Nothingburger:

Labour’s leader is facing a growing anti-Semitism scandal, but his base looks ready to weather it.

… Most recently there was the emergence of a 2013 video, in which Corbyn at a conference had dismissively referred to “Zionists”—a term referring to those who support Israel’s right to exist as a Jewish state, but which has also been appropriated by some anti-Semites as a slur for Jews—and declared they had no sense of English irony

No, Corbyn in the 2013 video was specifically referring to a small number of Zionist activists who had berated the Palestinian envoy after he made a speech a few nights earlier. This brouhaha makes the 2016 six-pointed-star-in-a-Trump-tweet whoop-tee-doo seem substantive.

It’s unclear what irony Corbyn was referring to, though it hardly seems to matter.

Journalistic words to live by: We don’t know what we’re talking about, though it hardly seems to matter.

What stands out is that the Labour leader was openly singling out Britain’s Jews—90 percent of whom identify as supporters of Israel (though not necessarily its government’s policies)—for in his view not being British enough. …

But despite the growing scandal, Corbyn’s most ardent supporters appear to be unwavering. In response to the backlash on Friday, Labour’s Shadow Chancellor John McDonnell accused Corbyn’s critics of “exacerbating the issue” by taking the Labour leader’s comments “out of context.” Moreover, a recent poll by YouGov found that most of the Britons who are following the latest controversies within the anti-Semitism scandal haven’t changed their opinions of Corbyn as a result. …

It’s still unclear exactly what impact, if any, Corbyn’s newly disclosed comments will have on his supporters. …

Just as Trump blames what he calls “fake news,” Corbyn has expressed similar frustration with his treatment in the media.

Left-wing news sites such as Skwakbox and The Canary offer prime examples. Known for defending the Labour leader against negative media coverage, both websites have been at the forefront of Corbyn’s defense throughout the anti-Semitism scandal, publishing posts that have dubbed the accusations against Corbyn as “fiction,” a “cynical manipulation” by the right-wing press, or attempted smears by the political establishment.

That just proves how anti-Semitic these anti-Semites are! The only reason they could possibly have for pointing out the embarrassing fact that the 43 second video doesn’t say what we said it says is their own anti-Semitism.

It’s a seamless circle of logic, when you think about it.

Maybe Corbyn was unfairly criticizing those English Zionist protesters in 2013, but he would have an awfully good case by this point that Jeffrey Goldberg doesn’t understand irony.