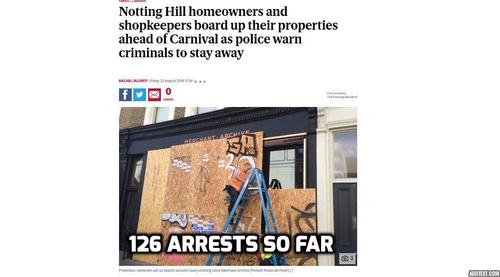 Notting Hill Carnival: 126 arrests made as police CRACKDOWN on disorder | LONDON police have arrested 126 people at the Notting Hill Carnival this weekend amid spiralling levels of violence in the capital, By Latifa Yedroudj, James Bickerton, August 27, 2018

Across the pond the Brits are coming up to an unhappy anniversary. Let me explain.

This Monday, August 27th, is the last Monday in August. That is what the Brits call a Bank Holiday — a three-day weekend. One feature of this particular Bank Holiday is the Notting Hill Carnival, advertised as a celebration of Caribbean culture. Notting Hill, you see, is a district in west-central London that was one of the first to be colonized by blacks from the West Indies in the earliest wave of Third World immigration after WW2.

The Carnival started in 1966, but it was prompted in part by some earlier events. One of those earlier events was a race riot, which took place at the end of August 1958, in, yes, Notting Hill. It wasn't Britain's first race riot; but because it happened in the capital, it got everyone's attention in a way previous ructions hadn't.

That's the anniversary I mentioned. The Notting Hill race riots took place sixty years ago this weekend. The Carnival started up eight years later as part of a medley of efforts to get race relations on a happier, more constructive track.

Things haven't exactly worked out as hoped for, though as always with race issues, you have to read carefully to learn this.

Most mainstream-media coverage of the Carnival is superficial and happy-clappy. Pictures of white politicians and policemen posing self-consciously among black carnival-goers are de rigueur.

However, as you'd expect for a black event, the Notting Hill Carnival is a disorderly affair with a lot of violence. There are hundreds of arrests every year. The actual number last year was 313: lower than usual, but there had been a big police sweep in the weeks leading up to the event, with more than six hundred arrests.

The level of apprehension this year is high because of the crime wave that London is currently experiencing. The homicide numbers for London have just passed a hundred, with shootings and stabbings leading the stats; and of course, for every homicide there are dozens of woundings, maimings, and disfigurings. Most recently a fashion for throwing acid at people has come up. Practically all of this crime is black on black, though you have to read the news reports with careful attention to notice that.

So nonblack residents of Notting Hill have triple-locked their apartments and left town for the weekend. Acres of wooden boards are going up around stores and private houses. Police and hospital emergency room staff are rubbing their hands with glee, anticipating lots of overtime. The phrase "knife arches" has suddenly appeared in news outlets: metal detectors, basically, being set up at entry points to the Carnival to deter people bringing in knives.

I was thirteen when the Notting Hill riots happened back in 1958. I can remember hearing the adults — working-class white English people — talking about it. The commonest opinion was that it was foolish of the authorities to let so many blacks settle in the country. It was just storing up trouble for the future, people said. Blacks and whites will never get along together, people said. Look at America, people said.

How ignorant and reactionary people were back then! And how wrong! Thank goodness we live now in a more enlightened time!