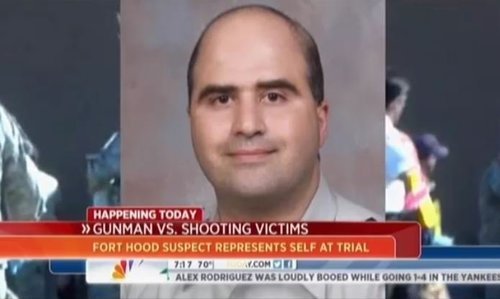 The Affirmative Action Killer—Army Was Warned About Hasan

Now we are learning that Dr. Hasan, the murderer of Fort Hood, was cut enormously more slack than any non-Muslim would have received. He retained his position only because of his minority status.

"Two years ago, a top psychiatrist at Walter Reed Army Medical Center was so concerned about what he saw as Nidal Hasan's incompetence and reckless behavior that he put those concerns in writing. NPR has obtained a copy of the memo, the first evaluation that has surfaced from Hasan's file.

Officials at Walter Reed sent that memo to Fort Hood this year when Hasan was transferred there.

Nevertheless, commanders still assigned Hasan – accused of killing 13 people in a mass shooting at Fort Hood on Nov. 5 – to work with some of the Army's most troubled and vulnerable soldiers.

On May 17, 2007, Hasan's supervisor at Walter Reed sent the memo to the Walter Reed credentials committee. It reads, "Memorandum for: Credentials Committee. Subject: CPT Nidal Hasan." More than a page long, the document warns that: "The Faculty has serious concerns about CPT Hasan's professionalism and work ethic. ... He demonstrates a pattern of poor judgment and a lack of professionalism." It is signed by the chief of psychiatric residents at Walter Reed, Maj. Scott Moran.

When shown the memo, two leading psychiatrists said it was so damning, it might have sunk Hasan's career if he had applied for a job outside the Army.

"Even if we were desperate for a psychiatrist, we would not even get him to the point where we would invite him for an interview," says Dr. Steven Sharfstein, who runs Sheppard Pratt's psychiatric medical center, based just outside Baltimore.

Sharfstein says it's a little hard to read the evaluation now and pretend that he doesn't know that Hasan is accused of shooting dozens of people. But he says if he had seen a memo like this about an applicant, Sharfstein would have avoided him like the plague.

The memo ticks off numerous problems over the course of Hasan's training, including proselytizing to his patients. It says he mistreated a homicidal patient and allowed her to escape from the emergency room, and that he blew off an important exam.

According to the memo, Hasan hardly did any work: He saw only 30 patients in 38 weeks. Sources at Walter Reed say most psychiatrists see at least 10 times that many patients. When Hasan was supposed to be on call for emergencies, he didn't even answer the phone."[Hasan's Supervisor Warned Army In 2007 by Daniel Zwerdling, NPR, November 18, 2009]