If there's anything more heartbreaking than a holiday death at the hands of an illegal alien, I don't know what it is. Last Thanksgiving, Marine Cpl. Brian Mathews and his date Jennifer Bower were killed by a drunk-driving illegal.

Of course, there's no good day for a family member to be struck down in a cruel and preventable crime. But for as long as they live, those related to the dead young man will remember Thanksgiving as the occasion of his untimely death. 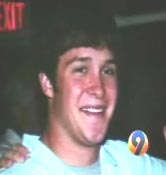 Andrew Newell, 22, of Boone, North Carolina, was killed when the Lexus SUV in which he was a passenger was struck by a vehicle driven by Juan Manuel Juarez Reyes, a previously deported Mexican. Andrew's father Brian remains hospitalized with critical injuries, while his mother Sallie Ellis Newell and sister Jacqueline Elizabeth, 18, were treated and released.

The Lexus was so mangled by the force of the crash that it took rescuers 45 minutes to extricate the victims from the wreck.

Family members said the Newells were returning from a Thanksgiving trip to South Carolina and were only a quarter-mile from home.

Authorities said Monday that Juarez Reyes was caught in the country by Border Patrol agents in 2002 and was sent back to Mexico. They aren’t sure when he re-entered the United States.

Police say he was speeding and drunk when the crash happened.

How sad that the Newell family was only a few blocks from the safety of home.