This story is all too common: a previously arrested (but not deported) drunk driving illegal alien takes the life of an innocent American. Had the government repatriated Osvaldo Cerda after his several marijuana arrests, he wouldn’t have been here to kill Heather VanHoozer, a 24-year-old nursing student.

Below, the VanHoozer family in happier times: parents Alan and Debra with Heather in the center. Heather was killed by a drunk driving illegal alien a year ago. 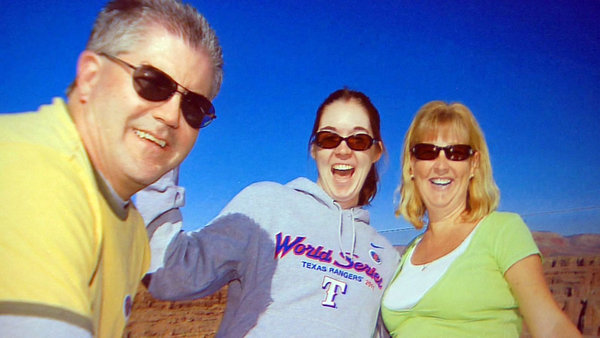 A local TV report discussed the illegal alien aspect, unlike too many news accounts when the perps are border-jumping foreigners.

Like many average citizens faced with a preventable death at the hands of a foreigner who should have been deported, the VanHoozers are shocked and surprised that their government did so little to protect their family. But in the new globalized America, foreign lawbreakers have more rights than upstanding citizens.

Every morning before work, and every evening after work, Alan and Debra VanHoozer stop at the cemetery on Garland Road.

The headstone is just a few feet away from away busy street. It is inscribed with three names: Alan, Debra and Heather.

It’s just not right that their daughter was the first to be buried.

Heather VanHoozer died 11 months ago in a terrible crash on Centerville Road in Garland. She was 24 years old.

Police said Osvaldo Cerda, then 18, was drunk when he T-boned the car of Heather’s boyfriend. According to the police report, even after the crash, a witness saw Cerda put a beer can to his mouth, then toss it down and crush it before running away.

Police caught him not far from the scene.

“He took our pride and joy. Heather was our life,” Debra Van Hoozer said.

“Twenty years is the max,” Debra said. “For what he did… he murdered our daughter, and he should be eligible for life. I think that needs to be changed.”

But the VanHoozers want more change than that.

Cerda is an illegal immigrant with a criminal record. He had had three prior arrests for marijuana possession. This still-grieving mother and father can not understand why he had not been deported.

“That needs to be changed,” Debra said.

Immigration and Customs Enforcement says arrests for marijuana do not immediately lead to deportation, especially if it involves a small amount. Each case is judged on an individual basis, the agency said.

When talking about Heather, both mother and father lit up. They described a unique family relationship where their daughter — a nursing student at Texas Woman’s University — was always with them.

Alan broke down as he called Heather “the best daughter I could have.” Through tears, he said: “Just couldn’t have asked for a better child.”

The VanHoozers simply want to know why Cerda’s checkered past didn’t stop him from stealing their future.