This case is a fine example of how foreigners will defend the most disgusting criminals of their tribe rather than respect the rule of law. Dzhokhar’s college buddies knew that he had bombed the Boston Marathon, killing several and maiming dozens, yet they aided in covering up his crime by removing evidence from his apartment. Did the Kazakhs support the Tsarnaev act of jihad, or was their action based solely on tribal loyalty? 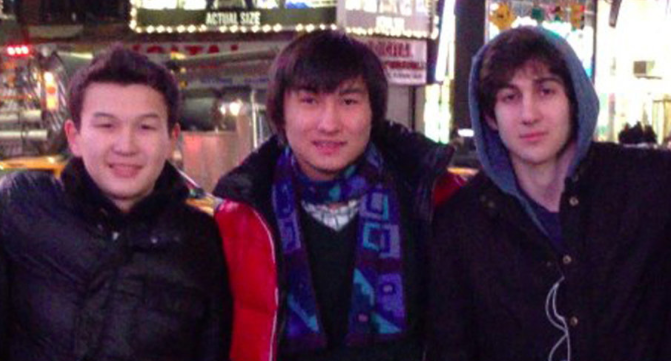 Naive politicians think the government should staple green cards to the diplomas of any and all foreign students with useful degrees, without considering whether they would be loyal law-abiding citizens. Instead of examining the threat to national security of admitting possibly hostile foreigners willy-nilly, Washington admitted a record number of foreign students to US campuses in 2012: 764,495. Unfriendly Red Chinese and Saudis were the most numerous.

However, there is good news today, namely the serious treatment of the Kazakh criminals with possible hard time and deportation. But wouldn’t it be better to screen foreign students more carefully before admitting them in the first place?

A grand jury on Thursday indicted two students from Kazakhstan on obstruction of justice charges, alleging they helped hide evidence related to the April Boston marathon bombing that killed three and injured 264, the U.S. Attorney’s office for Massachusetts said.

They are charged with removing a backpack containing fireworks and a laptop from Tsarnaev’s dorm room after the FBI released pictures of Dzhokhar and his older brother Tamerlan in an effort to learn the names of the bombers.

The pair were first charged on May 1 with conspiracy and remain in federal custody. They could face up to 20 years in prison on obstruction of justice charges, in addition to five years if convicted on conspiracy charges.

Both also face the possibility of deportation.

Tamerlan Tsarnaev died in a gun battle with police following the release of the images while Dzhokhar, 20, is in federal custody awaiting trial on charges that could bring the death penalty.

An attorney for Tazhayakov, Arkady Bukh, said he had been trying for the past three months to persuade federal prosecutors to drop charges against his client.

“There was no motive and no order from Tsarnaev to destroy evidence,” Bukh said in a phone interview. “Unfortunately, we couldn’t convince them. At this time there is little left but to go to trial.”

Kadyrbayev’s attorneys could not be reached for immediate comment.