Texas: Muslim Demands That US Flag Be Removed from Apartment

Here’s yet another example of why Muslim immigration is a very bad policy and must be ended: some mysterious Allah worshipper complained to an apartment manager about an American flag hung from a resident’s porch and she ordered him to remove it as a “threat.”

Do Muslim immigrants not understand that the United States is full of citizens who love to display their national flag? Perhaps diverse Saudis, Pakistanis et al do not understand patriotism based on their homeland experience.

Below, US citizen Duy Tran moved into a new apartment and immediately hung his flag which was called a “threat to the Muslim community.” 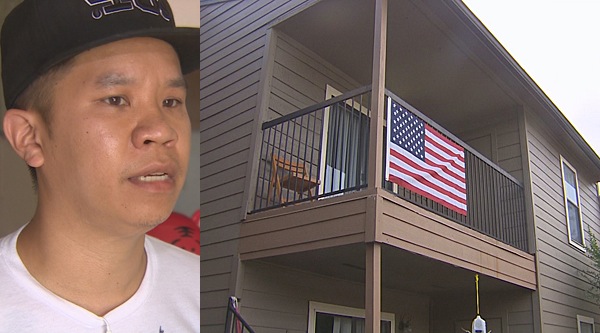 Interestingly, the law is on Tran’s side. The Freedom to Display the American Flag Act of 2005 disallows apartment managers from prohibiting US flag display:

Freedom to Display the American Flag Act of 2005 – States that a condominium association, cooperative association, or residential real estate management association may not adopt or enforce any policy, or enter into any agreement, that would restrict or prevent an association member from displaying the U.S. flag on residential property within the association with respect to which such member has a separate ownership interest or a right to exclusive possession or use.

This behavior is not unusual. Muslims have a habit of demanding Islam-submissive changes when they arrive as immigrants in a new territory.

One example from Moscow is memorable: A young Russian woman in a fur hat voiced her fears about Muslims, “I am scared. They come into our neighborhood and begin to tell us things we can and cannot do. We like to walk our dogs here and have outdoor barbecues, but the Muslims can say you cannot cook pork or walk your dog around here.”

WEBSTER, Texas — A Webster man says his apartment complex manager told him his American flag was a “threat to the Muslim community,” and that he has to take it down. But he’s not giving up without a fight.

Stepping onto Duy Tran’s balcony in Webster, one thing is clear: “It means a lot to me,” he said.

He’s talking about his American flag that he proudly put up when he moved in just a few days ago. But then an apartment manager at the Lodge on El Dorado told him he had to take it down.

We tried to ask a manager if that’s exactly what was said, but she just handed us a statement, refused to answer any questions, and called an officer to escort us off the property, before we could press any further:

“While the Lodge on El Dorado admires our resident’s patriotism, we must enforce our property rules and guidelines. Such guidelines maintain the aesthetics of our apartment community and provide for the safety of all residents. The apartment community already proudly displays our country’s flag in a safe and appropriate manner at the entrances to our community.”

But we saw other patriotic symbols hanging from other balconies in the complex, and Tran doesn’t plan to budge.

To Tran it’s about so much more than stars and stripes.

“I have friends that died for this country,” he said.

So he says this fight is the least he can do.

We have not heard of any residents complaining about any flags at the complex, or any of the patriotic items we saw. In fact, we spoke to several neighbors who say they want Tran’s flag to stay.