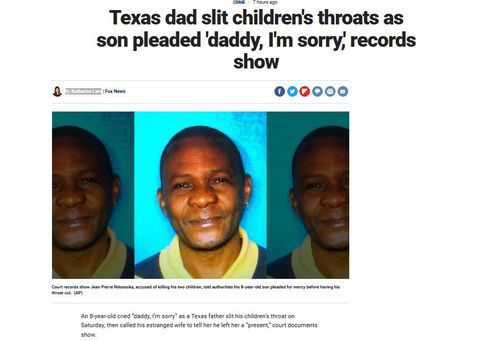 Is this Texas man from Paris?

A “Texas man,” Jean Pierre Ndossoka, murdered his two children by slitting their throats. He left a note written in French for his estranged wife, Sabine Ntongo.

An 8-year-old cried “daddy, I’m sorry” as a Texas father slit his children’s throat on Saturday, then called his estranged wife to tell her he left her a “present,” court documents show.

Jean Pierre Ndossoka, 62, was charged Tuesday with two counts of capital murder in the deaths of his two children, 8-year-old Marcel Ndossoka and 1-year-old Anna-Belle Faith Ndossoka, in his Houston apartment. The children’s mother, Sabine Ntongo, discovered their bodies after receiving a disturbing call from her estranged husband.

Even though this atrocity happened several days ago and is all over the MSM and even though the note was written in French, Jean Pierre Ndossoka is still reported as a "Texas man." Maybe he's from Paris, Texas.