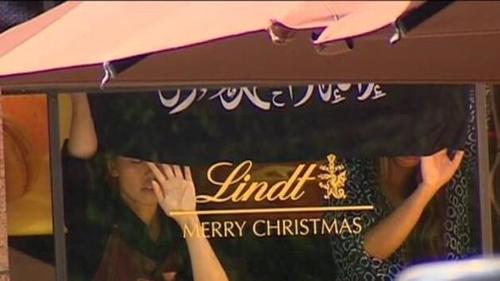 Hostages inside Sydney Cafe hold Islamic Flag up to window

There's a developing situation in Australia, where hostages have been taken by at least one gunman in Sydney.

At least one gunman has taken several people hostage at a cafe in the centre of the Australian city of Sydney.

Pictures on Australian television have shown at least three people with their hands up against a window, and a black flag with Arabic writing.

"All Australians should be reassured that our law enforcement and security agencies are well trained and equipped and are responding in a thorough and professional manner," he said in a statement.

There are no injuries at this time.

Australia has been fighting the problem of "radicalized" Muslims who are launching plots within the country or joining the Islamic State.  Discussion of the consequences of mass immigration from Islamic nations is illegal in the country, and the government of Tony Abbott reneged on a promise to restore free speech.