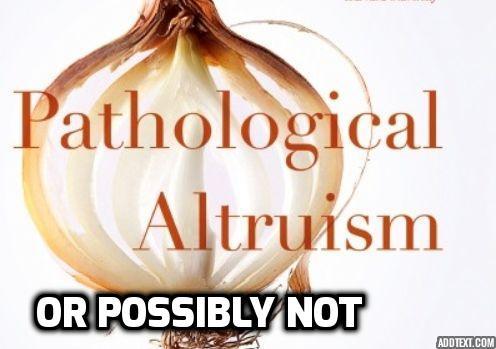 In my earlier post I used the phrase "pathological altruism."  The phrase has been around for a few years: since at least 1984, according to the book (published 2011 ... Jared Taylor reviewed it at AmRen in July 2012).

My Unz.com colleague JayMan, however, has pooh-poohed the phrase as "a silly term."

As I detailed in my post The Rise of Universalism, the universalist behavior of Northwestern Europeans is a natural consequence of their special flavor of reciprocal altruism, which is not strictly kin-centric and views all people (indeed, often non-humans as well) as potential recipients for sympathy. In that post, I explain how modern technology led to an inevitable increase in universalism among Northwestern Europeans – that runaway universalism was inevitable. Clearly an inherited phenotype can't be a pathology when it is possessed by sizable fractions of the populations under consideration. Rather universalist sentiment is a feature, not a bug (or more accurately, it is the result of a feature).

OK, JayMan.  In future I'll try to stick with "runaway universalism."  Said in the right pitch, it actually sounds crazier than "pathological antruism."