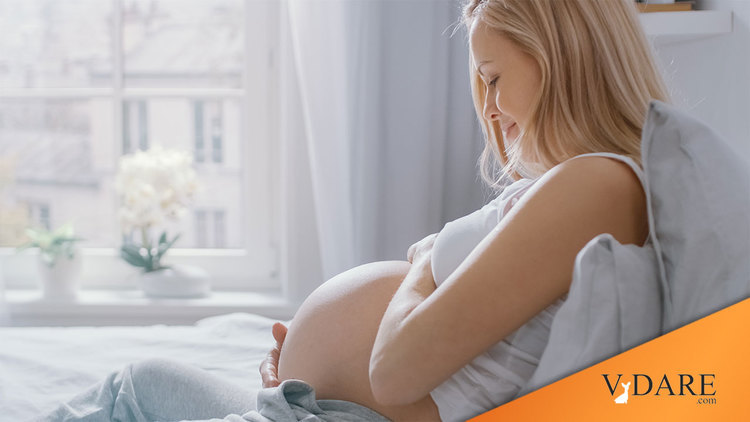 "Tell Me a State’s Fertility Rate, and I’ll Tell You How It Voted"

My December 20, 2004 article in The American Conservative introduced the concept of the "Baby Gap" in American voting.

Tell Me a State’s Fertility Rate, and I’ll Tell You How It Voted

Grumbling GOP commentators and reveling feminists finally agree on something: This was the year when single ladies helped to deck the White House in blue. But another, even more powerful feminine factor was at play in this election, as it has been in races past: Almost invisibly over the past decade, family size in America has emerged as our deepest political dividing line.

Stunningly, the postponement of marriage and parenting — the factors that shrink the birth rate — is the very best predictor of a person’s politics in the United States, over even income and education levels, a Belgian demographer named Ron Lesthaeghe has discovered.

Actually, Professor Lesthaeghe has graciously conceded that I beat him to this discovery by a year or so, as I pointed out in this 2006 VDARE.com article.

Actually, it's white fertility that correlates with Republican voting by state. For example, California, the biggest state, has moderate overall fertility, but votes solidly Democratic. It has low white fertility.

The converse, according to futurist Joel Kotkin, marks “the rise of post-familialism,” overturning the notion that a woman's life requires a wedding dress and at least two kids to dutifully rear. David Brooks devoted a column to this report Friday, and his reaction demonstrates the red blood spilling over our shift to a freer attitude toward life and family choices. “...

Here's Brooks's 2004 NYT column touting my research, for which he was systematically denounced for guilt by association.

Americans are increasingly rejecting traditional conservative power structures — the old models of authoritarian Church and State — as Europeans have for decades. “It’s amazing how once you get rid of obedience to the authority of institutions so much simply falls away,” Lesthaeghe told me over coffee at a conference in Vienna last year. He went on to predict that, despite the GOP backlash against it, American’s adaptation toward a more liberal way of living could only encourage a political shift to the left. You could see this destiny manifested in last Tuesday’s vote: in Maine, for marriage equality; in New Hampshire, for a completely woman-governed state for the first time in American history; in Massachusetts, for progressive candidate Elizabeth Warren; and so on.

Warren strikes me as somebody sympathetic to the struggles of couples hoping to be able to afford to form a family. But, what do I know? Here's my 2003 VDARE.com review of a book by her.

Yet, for all those social measures on the 2012 ballot, our near-continental divide of politics and fertility was even more distinct during the Bush era, before the New York Times had added the “celebrations” category to its still-hetero wedding listings. Despite the rampant conservatism of that time, there was no rape caucus to combat; the Evangelical block was country strong. In the 2004 presidential election, while swift boats sailed cross the headlines, fertility rates in states that voted for Bush were 12 percent higher than they were in states that picked Kerry. When Lesthaeghe studied the map county by county, he found the link between family size and political leaning became even stronger. This morning, he sent me an e-mail to say he still has to check the county results from this election, but once again, he expects the same granular correlation, "no surprises, judging from the state-level results."

Since then, the polarization has weakened slightly. While voting in 2008 fell clearly along fertility lines, demographer Phillip Morgan found in examining the fertility of “MSNBC v. Fox News” audiences liberals' post-Obama glow engendered the optimism needed to have a kid in a crushing recession.

Conversely, a red outlook no longer meant a rosy one to the snarling cynics at Fox: Subsequently, conservatives began to consider larger, and therefore more expensive, families to be an increasing impossibility. Low birth rates aren’t really about freedom but fear, Morgan believes. “People put off having kids,” which leads to sinking fertility, he told me, “because they’re really frightened about the future.”

With liberal fertility on the rise

Hispanic fertility, and that has dropped sharply since 2008.

, the predictive power of family size finds itself waning. As our demographics change, that county-by-county correlation that was so absolute ten years ago is beginning to yield to a purple reign. Celinda Lake, one of the Democratic party’s leading pollsters and strategists, who predicted the single ladies swing well before the exit polls, told me our future partisan fertility map is being redrawn. She says that as birth rates rise amongst women of color who vote consistently Democrat, the states working blue may make a radical turn to become our most fertile ones.

Right, but that's why I focused on white fertility in 2004.

“We’re on the verge of a dramatic shift. It will be a different conversation ten years from now,” Lake told me, estimating that the predictive power of fertility will last until 2020, but not much longer.

But that would be because whites are increasingly swamped in the electorate.

And with an increasingly liberal bloc of mothers — like the ones who renewed Obama’s lease on the Oval Office in massive numbers — perhaps it’s not impossible to imagine electing a woman who opted for her own one-child family so she could dedicate herself to a world outside the home. A low-fertility politic doesn't mean no fertility; it doesn't mean refusing motherhood. Rather, it supports a woman’s choice to “shut it down,” to borrow a recent turn of phrase. It speaks to an ethic of an inclusive, extra-domestic life.