Still more immigrants have rejected America for a life of hyper-Islamic mass murder. In the current case, three out of four are foreign born.

The young men are part of a trending uptick of increased Islo-terror plots. As analyst Walid Phares noted in 2010, “According to open-source reports, between 2001 and 2008, U.S. agencies stopped one or two terror attempts a year. However, from 2009 until today, the government has been uncovering one or two cases a month, a troubling growth in jihadi activities.”

Another study found 45 terrorist plots were foiled in the decade following the 9/11 attacks.

Hostile Muslims apparently believe they are on a roll around the world to establish an Islamic caliphate of totalitarian sharia rule, and the belief shows up in increased jihadist activity. Muslim immigration continues to be an unwise public policy, to say the least 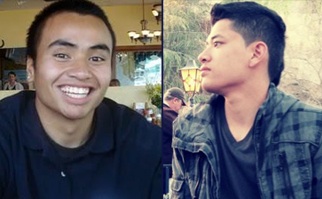 One interesting aspect is that Sohiel Omar Kabir, 34, is said to have converted Ontario resident Ralph Deleon, 23, and Upland resident Alejandro Santana, 21, to the doctrine of killer Islam. How did that conversation go? “Hey guys, let’s all go jihad and murder American infidels for Allah.”

Kabir was born in Afghanistan and served in the Air Force from 2000 to 2001, although the documents did not specify why he spent only a year in the service.

RIVERSIDE, Calif. (KTLA) — Four Southern California men have been charged with plotting to join Al-Qaida and the Taliban in Afghanistan in order to kill Americans.

According to a criminal complaint filed in U.S. District Court in the Central District of California, the defendants conspired to provide material support to terrorists in preparation for or in carrying out: conspiracy to kill, kidnap, maim, or injure persons and damage property in a foreign country, killing and attempting to kill officers and employees of the United States, killing nationals of the United States, conspiracy to use a weapon of mass destruction outside the United States; and bombing places of public use and government facilities.

The defendants, listed below, are also known by alias identities listed in the criminal complaint.

?Ralph Deleon, 23, of Ontario, a lawful permanent resident alien, born in the Philippines.

?Miguel Alejandro Santana Vidriales (further described herein and in the criminal complaint as ?Santana?), 21, of Upland, a lawful permanent resident, born in Mexico and whose application for citizenship is pending in the United States.

The complaint, which was unsealed today during the defendants? initial appearance in U.S. District Court, alleges that in 2010, Kabir introduced Deleon and Santana to radical and violent Islamic doctrine and various extremist material, including essays and lectures by now-deceased Al Qa?ida in the Arabian Peninsula leader, Anwar Al-Awlaqi.

Kabir traveled overseas in December 2011 and later to Afghanistan in July 2012, where he continued to communicate with Santana and DeLeon to arrange for their travel to join him in Afghanistan, according to the complaint.

The complaint alleges that Kabir told Santana and Deleon that he had made contacts with individuals who have connections to terrorist organizations.

Kabir further said that he would wait for their arrival before departing to a training location in Afghanistan and that, when they arrived, they would meet ?the students? and ?the professors.?

The complaint alleges that Santana and Deleon told a confidential source working for the FBI, identified in the complaint as the ?CS,? that they planned to travel to Afghanistan to engage in ?violent jihad.?

In addition, the defendants described potential targets for violent attacks, including overseas American military personnel and bases, according to the complaint.

Evidence in this case demonstrates that the defendants used the word ?jihad? to refer to armed combat, according to the complaint.

According to the complaint, the defendants both discussed the plot among themselves and with the confidential source.

The various conversations detail the defendants? plans to travel overseas to attend terrorist training, as well as to kill American soldiers and others.

In one discussion with the FBI confidential source, Santana and Deleon discussed their preferred roles in carrying out attacks.

For example, Santana stated that he had experience with firearms and that he wanted to become a sniper. Deleon stated he wanted to be on the front lines with a second choice of explosives. Both men also indicated they were willing to kill an enemy.

In September 2012, Deleon and Santana recruited defendant Gojali to join them and to travel overseas to commit violent jihad, as alleged in the complaint.

The complaint further alleges that defendants Santana, Deleon and Gojali made plans to join Kabir in Afghanistan to attend terrorist training, and that they arranged travel logistics, including flight arrangements and required documentation.

The complaint details the defendants? activity in raising funds for their travel to Afghanistan and their discussion of various cover stories and code words they could use to conceal their true intentions when traveling abroad.

The complaint further alleges that Santana, Deleon, and Gojali conducted preliminary training in southern California at firearms and paintball facilities to prepare for terrorist training overseas.

Defendants Santana, Deleon and Gojali were apprehended on Friday without incident by members of the Joint Terrorism Task Force and had their initial appearance before a federal magistrate this afternoon in U.S. District Court in Riverside, California.

Santana and Deleon were remanded to federal custody and Gojali?s detention hearing was continued to Monday, November 26th. Kabir is in custody in Afghanistan.

If convicted, the defendants face a statutory maximum penalty of 15 years in federal prison.