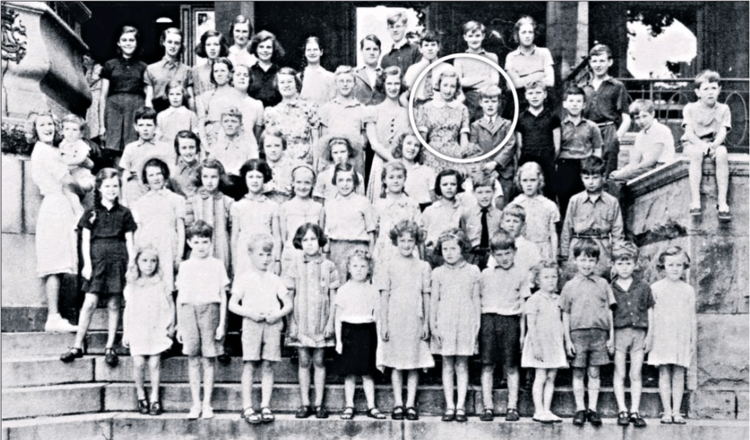 From The Sunday Telegraph:

In 1940, Yale University gave 125 children of Oxford academics refuge from the Nazis. Jonathan Freedland reveals how leaders of the eugenics movement may have planned to repopulate a devastated Britain with a 'superior’ breed of human.

At first glance, it is an utterly benign and heart-warming story, a tale of child-rescue and salvation, of friendship across the ocean at a time of war. And for those involved, especially the children sheltered from Hitler’s bombs by one of America’s most prestigious universities, it was no more complicated than that: an act of altruistic, life-saving generosity.

And yet this story might have a twist, a suspicion that somewhere behind this deed of great kindness lurked a darker motive.

The story – which forms the backdrop of my new novel, Pantheon, published under the pseudonym Sam Bourne – begins in the mid-summer of 1940, with Britain isolated and alone against the Nazi menace.

... That was certainly the fear among the fellows and dons of Oxford in June 1940, as they received an unexpected letter from their counterparts across the Atlantic at Yale. It came from a new entity calling itself the Yale Faculty Committee for Receiving Oxford and Cambridge University Children and it offered nothing less than a haven an ocean away.

While plenty of British children had already been evacuated from the cities to the countryside, this was an offer on an altogether different scale – the promise of complete escape from the war in Europe. Children who went to America would evade not only the Luftwaffe’s bombs but the dread prospect of German invasion.

... In the end, the parents of 125 Oxford children decided to say yes to Yale.

... Among them was five-year-old Juliet Phelps Brown, now Juliet Hopkins, whose parents were convinced that Britain was about “to become a province of Germany” and who could not countenance living in such a place: “How could academics live with people who burned books?”

... In this, they were not so unique. By one estimate, some 5,000 children sought refuge from the war in the US, with another 6,000 fleeing to Canada.

... Officially, the Yale sojourn was the product of what Ann Spokes – now Ann Spokes Symonds, long-time chronicler of the evacuation and still active as a historian – refers to as the fellowship of scholars, “the camaraderie between educated people” that connected two great universities. Yale simply empathised with Oxford’s plight and wanted to help.

But others suspect that is not the whole story. Juliet Hopkins had such fond memories of her time at Yale, she went back there to do postgraduate work, initially staying with her old foster family. Still, she is among those who have long nurtured a suspicion, not about the families who opened their homes to the sons and daughters of strangers, but about the organisers of the Yale effort. Put bluntly, they wonder if their rescue was motivated in part by an idea that today makes most of us shudder: eugenics.

In the pre-war period, the belief that society should strive to breed a better quality of human stock was utterly mainstream, on both the Left and Right, in both Britain and America.

Eugenics, one of whose leading evangelists was Charles Darwin’s son Leonard, saw the human race as no different from any other animal: just as a farmer raising livestock seeks to breed more of the strong and weed out the weak, so human society should aim to do the same.

According to the eugenicists, whose number in pre-war Britain included some of the luminaries of the age – Bertrand Russell, George Bernard Shaw, William Beveridge, John Maynard Keynes, Marie Stopes and others – those deemed superior in intellect and of greater moral worth should be encouraged to have more children; those branded inferior should be urged, or even coerced, to have fewer children or none at all.

Could this kind of eugenic thinking have prompted Yale’s decision to offer a haven to those Oxford children? Was Yale hoping to save the offspring of the British academic elite, protecting those 125 children because it saw them as a future leadership class especially deserving of preservation? Is it true that, as Hopkins puts it, “They wanted to save the gene pool”?

It is striking that Yale’s offer was made exclusively to the children of Oxford and Cambridge. Note the words used by Dr John Fulton of Yale Medical School, a prime mover behind the effort, who declared that his rescue committee hoped to save “at least some of the children of intellectuals before the storm breaks”.

... Crucially, eugenics was not just mainstream in pre-war Yale, it was, in the words of Gaddis Smith, Emeritus Professor of History at Yale and the author of a forthcoming history of the university, “red hot”.

... Meanwhile, Smith describes Yale’s president until 1937, James Angell, as “a fanatic eugenicist in the worst meaning of that word”. According to Angell, who wrote an introduction to Leonard Darwin’s What is Eugenics?, “Modern medicine, unless combined with some kind of practicable eugenic program, may result in an excess of feeble and incompetent stock.” In other words, pre-war Yale was in thrall to an idea that today strikes us as horribly close to Nazism.

Smith is candid that the university was then also “notorious as a bastion of anti-Semitism”. The professor has seen documents that show there was some discomfort at the discovery that one of the Oxford mothers was “a Jewess”.

This, then, was the intellectual climate of the campus in which the Oxford evacuation plan was hatched.

Even without an explicit statement of intent, it seems hard to believe eugenics did not play a key part in the decision to protect those 125 “children of intellectuals”, thereby deeming their lives more worthy of saving than the lives of those other British children who would have been lost.

Once Pantheon was completed, I sent an early copy to Juliet Hopkins. She discovered there something she had never known before – that Ellsworth Huntington, the man who had taken in her brother, her mother and her, the man she still remembers as a kindly, grandfatherly figure so generous he insisted his two British foster children be educated privately at his expense, was not only the Professor of Geography at Yale. He was also a past president of the American Eugenics Society.

And so, seven decades later, the suspicion lingers on.

Jonathan Freedland / Sam Bourne is a columnist for the Guardian and the Jewish Chronicle.
From the dust cover promotional copy of Pantheon:

Europe is ablaze. America is undecided about joining the fight against Nazism. And James Zennor, a brilliant, troubled, young Oxford don is horrified. He returns one morning from rowing to discover that his wife has disappeared with their young son, leaving only a note declaring her continuing love.

A frantic search through wartime England leads James across the Atlantic and to one of America’s greatest universities, its elite clubs and secret societies – right to the heart of the American establishment. And in his hunt for his family, James unearths one of the darkest and deadliest secrets of a world at war…

Spoiler alert: The darkest secret of WWII (and of a couple of decades after that, as well), apparently, is that Ivy League and Seven Sisters freshmen had their pictures taken naked as part of a study of whether body shape could be used to predict behavior. (There's a naked picture of Hillary Clinton at Vassar in some dusty archive somewhere. John Derbyshire wrote about William Sheldon's study in 2002.) It all had something to do with eugenics and since we all now know that eugenics=Hitler, it's, therefore, the darkest secret of WWII.
In a sane world, some friend of Jonathan Freedland would have laughed out loud at him when he recounted the plot for his upcoming thriller and said, "Oh, come on, Jonathan: eugenics, Yale, Nazis, elite WASP secret societies, Darwinists, shiksas being talked into taking their clothes off for dubious reasons: this sounds like a Mel Brooks parody of tired Jewish obsessions and neuroses."
But in our world, nobody dares laugh and explain to poor Mr. Freedland that his fixations are amusingly shopworn and stereotypically Jewish, so we keep hearing this kind of hilariously stupid stuff over and over.