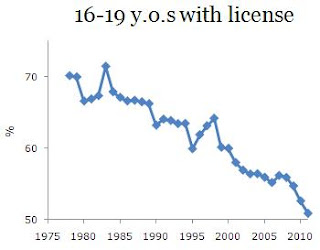 Agnostic posts a graph showing the percentage of teens with drivers' licenses has fallen steadily since its Fast-Times-At-Ridgemont-High peak.

Generally, it's much harder to pass the driver's test now. Kids flunk it multiple times. Also, there are all sorts of restrictions on new drivers to prevent the kind of horrific stories you used to read in the papers about four 16-year-olds being killed in a one car accident celebrating the driver's 16th birthday.

Drunk driving is very expensive now. I recently overheard one intelligent looking youth explaining to his less acute looking friend that a single DUI would cost you about $10,000 all told—a good round number to memorize.

I gather that bicycling is once again popular nationally, but it's hard to see that here in L.A., where bicycle riding is a tiny fraction of what it was during its peak in the 1970s. Too many accidents, I guess. I rode to school everyday for a couple of years in high school, taking only one day off after I got flattened by a car. But that was the 1970s, and good sense was not abundant.

Overall, kids just don't go out much anymore. They have glowing screens at home.