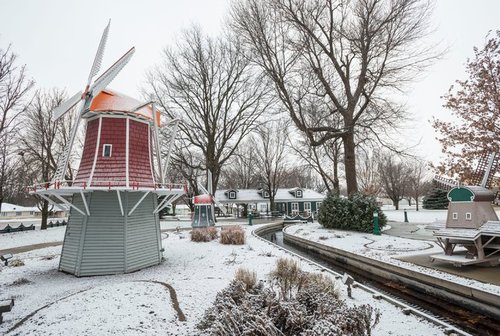 The New York Times’ Upshot section, which was founded by Dave Leonhardt when the NYT let Nate Silver take his FiveThirtyEight to ESPN, has worked closely with economist Raj Chetty since 2013 to publicize Chetty’s findings about how to fight inequality by identifying which places in the country have the highest upward income mobility for working class Americans. Strikingly, #1 of all counties in America in Chetty’s 2015 study was Sioux County, Iowa, which is also the subject of this new Upshot article wondering why Sioux County is the most conservative in the upcoming Iowa Caucus.

But Upshot fails to notice the connection.

ORANGE CITY, Iowa — A century of assimilation has blurred European ethnic heritage in much of the United States, but here in the far northwestern corner of Iowa, people still joke, “You’re not mutch if you’re not Dutch.”

It is here where the Iowa caucuses earn their reputation for backing the most conservative and religious candidates. Despite representing less than 2 percent of the state’s population, the region so overwhelmingly favors conservative candidates that it punches far above its weight. The area can deliver such lopsided margins to conservative candidates that it can cancel out the tallies of far more moderate and populous areas. This time around, the northwestern region might be a stronghold for Ted Cruz.

Without these areas, the Iowa caucuses — and indeed the Republican nominating process — might be very different.

The region’s leanings have their origins in Europe a century and more ago, when religious disputes in the Netherlands sent many conservative Dutch Protestants to the New World. …

Religiosity hasn’t dulled, either: 85 percent of Sioux County’s residents belong to one of the area’s 39 religious congregations, one of the highest rates in the country. “You could call this the Bible Belt of Iowa,” said Mark Lundberg, the chairman of the Sioux County Republican Party.

The election results speak for themselves. Sioux County and the surrounding Dutch areas voted for Rick Santorum in 2012 and Mike Huckabee in 2008, both of whom won the Iowa caucuses. They also threw their support behind Gary Bauer, a former president of the Family Research Council, in 2000 and Pat Buchanan in 1996, who did not win. In 2012, all of Mr. Santorum’s top six vote margins came from areas with a disproportionately strong Dutch heritage, including Orange City and Pella. It was enough to cancel Mitt Romney’s strength in more moderate and far more populous areas, like Polk County, where Des Moines is.

In state politics, the region overwhelmingly backed the evangelical kingmaker Bob Vander Plaats, whose name reflects his origin, in a competitive primary for governor. It also voted in the 2014 G.O.P. Senate primary for Sam Clovis, now a top adviser to Donald Trump. He was soundly defeated by Joni Ernst everywhere else in the state.

At a recent caucus training session for Sioux County Republicans, every voter I spoke with listed abortion first among their most important issues. The war with the Islamic State and immigration were mentioned later, if at all.

The attendees were well spoken and well informed, often rattling off facts about the candidates that get little or no attention in the national news media, like which ones have political donors or super PAC backers who support same-sex marriage. …

Marco Rubio may be suffering from the same thing, and voters expressed reservations about Mr. Rubio on issues including immigration and same-sex marriage.

It was Mr. Cruz who seemed to garner more support here than anyone else, a view that is borne out by recent events and data. The next day, Mr. Cruz was endorsed by Mr. Vander Plaats — who supported Mr. Huckabee and Mr. Santorum in the last two caucuses. He was already endorsed by Steve King, the provocative congressman who represents the district.

Polls have since shown Mr. Cruz edging ahead of Mr. Trump in Iowa with strong support from conservative and evangelical voters, implying that Mr. Cruz might have an even larger lead in this particularly conservative and religious area.

I wrote about Sioux County in Taki’s Magazine earlier this year in Moneyball for Real Estate:

… take a look at Chetty’s 25 Best Counties for the lower half of the income scale. The top county, the positive doppelganger to Oglala Lakota County, is Sioux County, Iowa, where kids grew up to make 35 percent more than the national average would predict. Ironically, while Oglala Lakota County is almost all Sioux, Sioux County is 97 percent white.

Sioux County is an impressive place, sort of the Palo Alto of the recent Midwestern farm boom that drove land prices up steadily from 2004 through 2013 (before dropping in 2014). It has fantastic soil for growing corn, and climate change has been making the local weather more beneficent over the last three decades. In late 2011, some farmland in Sioux County sold for a Midwestern record of $20,000 per acre, which would be $3.2 million for a typical 160-acre farm. Sioux County also has some cultural advantages, such as ethnic homogeneity (in 1980 it was found to be the most Dutch place in America). It’s also quite socially conservative, with 80 percent of the population belonging to churches.

While growers in California demand more illegal immigrants, Sioux County voters prefer to use productivity-expanding technology to do the work themselves. Republican Congressman Steve King, an outspoken immigration restrictionist, earned 83 percent of Sioux County’s votes in 2012.

Chetty’s 25 Best Counties for the working class look an awful lot like Sioux County. There are five more in Iowa, six in Nebraska, four in North Dakota (with its energy boom), three in South Dakota, two in Utah, one in Kansas, one in Colorado, one in Montana, and one in Wyoming.

I’ve pointed out three big methodological problems remaining in Chetty’s analysis, but it is pretty interesting.