Tech Diversity— "The Next Civil Rights Movement". Jesse Jackson Wrong About One Thing, and Right About Another

"This is the next step in the civil rights movement" declares Jesse Jackson, black chauvinist, socialist agitator and scam artist. Jackson has now set his sights on the tech industry, which he says isn't "diverse" enough.

I have a simple solution. Jackson should form his own high-tech company, and staff it with all these minorities he says are being excluded from good jobs in the currently-existing tech companies. It could be called "Rainbow Tech" or something, and could really show the industry what's been missing.

Of course, that's not Jackson's strategy. The famed "civil rights leader" wants the government to force companies to do what he says.

According to USA TODAY: 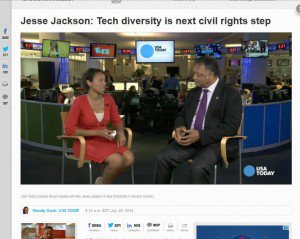 USA TODAY is apparently right on board with Jackson, having him speak to its board and presenting this article which accepts his premises unquestionably. They couldn't interview anybody with an opposing point of view on the tech diversity issue. Why not interview Steve Sailer?

Back to USA Today:

Jackson has lobbied nearly two dozen tech companies to disclose hiring data, and about a dozen have done so. The result is sobering: Men make up 62% to 70% of the staffs of Twitter, Google, Facebook, Yahoo and LinkedIn, while whites and Asians comprise 88% to 91%, according to company data released in the past two months. Their dominance is highest in computer programming and other tech jobs that tend to pay the most.

For a free society that shouldn't in and of itself be a problem. Is the fact that the NBA is overwhelmingly black a problem? Should every industry have the same demographics?

"This is the next step in the civil rights movement," Jackson said, noting minorities represent a sizable share of tech consumers but not its workers. He said it's bad business to exclude them. Of Twitter's U.S. employees, only 3% are Hispanic and 5% black, but those groups along with Asian Americans account for 41% of its U.S. users.

Wait! Is Jackson equating buying high-tech products with creating high-tech products? Honestly? So if I can buy a computer, does it follow that I'm capable of designing one? And if I can't, that's not fair? I guess that's the logical conclusion of radical egalitarianism.

Notice too that Jesse fudges the statistics. He lumps Asians with whites when complaining about how Asians and whites dominate the field. Then he lumps Asians with blacks and Hispanics when discussing the consumers of high-tech products. Whatever fits the agenda! Pretty tricky there Jesse!

Dean Garfield, president of the Information Technology Industry Council, said the industry prides itself on being a meritocracy. "We can, and will, expand our definitions of merit to recognize the importance and value of diversity to our success," he wrote in a recent USA TODAY op-ed piece.

Hmm, "expand our definitions of merit to recognize the importance and value of diversity to our success" sounds suspiciously like a lowering of standards to achieve a diversity quota.

What we can expect is less freedom, more government meddling, and more anti-white, and maybe anti-Asian, discrimination.

Having said that, I'd like to point out that the article discusses another topic wherein I agree with Jesse Jackson. Really!

Jackson spoke after meeting with Labor Secretary Tom Perez to press for a review of H-1B visas, which allow U.S. companies to hire foreigners for specialty jobs. He said data show Americans have the skills and should have first access to high-paying tech work.

Good for Jesse Jackson. On this issue, Jackson is defending American workers (of whatever race) against cheap-labor profiteers like Bill Gates who want to bring cheap foreign labor into the American tech industry. Now that's an area in which we can work together with Jesse Jackson.

[Butch] Wing [of Jackson's organization] said Silicon Valley uses H-1B visas to pay foreigners half what U.S. counterparts earn. "They're being hired as cheap labor," said Norman Matloff, professor of computer science at the University of California-Davis, who has researched the topic. He said there's no shortage of Americans with tech-related skills but rather a widespread abuse of the H-1B visa program, which is run by the Department of Labor.

So there you have it. The article is really about two separate issues: (1) Government social engineering to achieve artificial diversity quotas, and (2) Americans getting replaced with foreign labor. We can oppose Jesse Jackson on the first issue, and work with him on the second.

The USA TODAY article is here and includes video of an interview with Jesse Jackson.