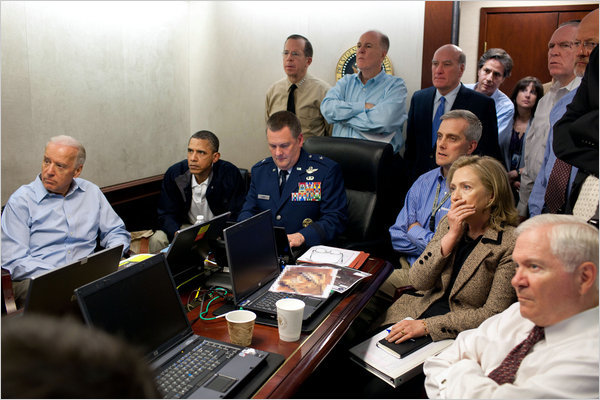 The Administration of George W. Bush made us used to a federal government that messed up frequently in the real world, but showed impressive marketing skills and message discipline in the world of spin. This past week has shown us, strangely, an Obama Administration succeeding very nicely in the real world, but then delivering a long series of disabling shots to its own collective foot.

While the military execution was pretty damn good — kill bin Laden, spare most of the women and all of the children, grab records, evade the Pakistani Air Force — it's pretty clear that the politicians didn't think through what their responsibilities would be afterwards.

At least the politicians didn't impose a bunch of regulations on the SEALs — say, first ask bin Laden to surrender in Arabic, Pashto, English, and International Sign Language — that might have endangered the mission. But they didn't seem to ask themselves what kind of questions they were inevitably going to get asked afterwards, so they ended up improvising contradictorily with lots of now obviously risible inventions.

McCain painted Obama as a celebrity, happy to hear applause. He did little in his first 2 years to change that opinion.

Ideally, Obama would have said little about bin Laden, leaving us with the impression he gives orders like this all day long. That would make him look really powerful. That would earn back a lot of the voters he had in 2008, but lost in the interim.

Instead his aides said too much about the raid, much of which they are revising. He's waffling on providing a picture of a dead Osama, leading some 9/11 families to demand a photo. In contrast to the strong confident president we saw Sunday night, we are learning he kept his generals waiting.

The contrast between Obama, and the victorious Seal Team is striking. We know a lot about what Obama did, but we may never learn about the Seal Team members until too it's late.

The American people gave him a great chance to reinvent himself, and what did he do? He reinstalled the fake greek columns.

The strong, silent approach would have been the best choice: Osama bin Laden, the man behind 9/11, is dead. Last night, American forces raided his compound deep inside Pakistan and killed him. Vengeance is ours.

But, Team Obama couldn't resist chatting up a storm.

Getting facts wrong is unavoidable. I, for example, accepted the Google Maps identification of the wrong compound in Abbottabad. (Sorry, Mr. Anonymous Rich Pakistani!) But, by now, I think we can start to figure out the non-random reasons behind all the changes in story.

The White House politicians never seemed to think through the contrast between what they were doing — sending men to, more or less, execute a mass murderer — and their desire to make this the grand kickoff of Campaign 2012 by making it seem like Obama was totally involved minute by minute.

What doesn't sound cool, however, is the idea of the President watching his lethal order being carried out on live video feed. That's kind of creepy.

That may explain why we were suddenly told that, in the grand tradition of Rosemary Woods, the President somehow didn't see the key 20 to 25 minutes of video feed when bin Laden was killed.

If so, the real mistake was in not thinking things through during the months that evidence was accumulating that they had found bin Laden.

There were also all the usual Obama constituencies of NPR subscribers and Euroweenies who give Obama Nobel Prizes (he still hasn't won the Nobel for Literature). Thus, this story on Death Penalty News:

The death of bin Laden was not an "execution" and does not call into question Europe's opposition to the death penalty, the European Commission said today.

In the wake of a statement from Commission president Jose Manuel Barroso welcoming his death as a "major achievement" which ensured his crimes did not go unpunished, a spokeswoman insisted the EU's underlying values of justice were not called into question. ... "This in no way questions the basic principles and values we have always supported ... this was not the execution of a death sentence, it was something completely different. We continue to be against the death penalty."

My guess would be that the White House gave the SEALs trigger-pullers lawyerly instructions that technically gave Obama an out from having precisely ordered OBL's death — e.g., if bin Laden surrenders in a particularly cowardly method that his entire life, which you've got to admit does show courage, makes unlikely, well, then you don't have to shoot him. (Or, maybe they really didn't expect the SEALs to shoot him.)

The first sign that the White House hadn't thought things through was the quick announcement that they had dumped the body in the ocean. When I first heard that I couldn't believe they would botch the aftermath so badly, so I blogged that they should bury OBL on completely secure Diego Garcia.

Presumably, in all the years Obama had been publicly advocating this type of raid (and give him credit for doing that), neither he nor his brain trust had thought much about what to do with bin Laden's body.

There were a couple of obvious interacting issues: after years of the world being told by American and Pakistani government officials that bin Laden was holed up, perhaps in a cave, in remote Waziristan, he turned out to be living in a three story house near the Pakistan Military Academy. Clearly, somebody official hasn't been truthful. The very location of the raid, Abbottabad, meant that there would be lots of questions from disillusioned people. This meant that OBL's body would be important as evidence that they really got him.

The instructions to the SEALs, you'll notice, were therefore sensible in this situation: take bin Laden's body and leave the other bodies. So, they thought it through that far.

But, it appears they hadn't thought much about what state OBL's corpse would be in, either from illness or bullets, facts that pictures or an autopsy would reveal. So, the initial stories out of the White House made it sound like OBL had gone down like Tony Montana in Scarface, guns blazing. Those then had to be walked back.

A commenter calling himself "Incompetence in Chief" (I think he or she chooses a catchy new name each time, a practice which I would recommend to other commenters rather than generic "Anonymous") writes:

People claimed that Bush and his people were dumb as dirt, but the Obama team's main job was handing the messaging of this raid. This WH has more serially inept than anything I can recall for any POTUS.

Here's the famous picture released by the White House: 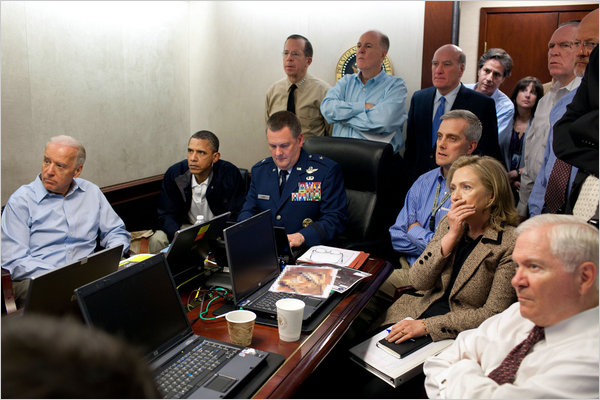 Now look at it again.

What a terrible picture. The President looks insignificant, hunched-over, not in control, like the least important person in the photo. The military man is sitting in what should be the President's chair: the big one with the high back. Which chair would President Reagan have sat in?

Obama's body language looks pretty depressed. The word "power" repeatedly comes up in Dreams from My Father, but Obama's experience of exercising power has been mostly at the cancelling-somebody's-grant level. This is what real President-level power looks like: killing people. And the Obama in this picture looks like he's just realizing what that means. (When it was over, he made his usual speech about how "I" did this and "I" ordered that.)

Now I'm trying to decide how much each of the following factors explain Obama's team total incompetence:

3) They've grown incredibly lazy and arrogant knowing the Pravda MSM will parrot their obvious lies and errors without question or comment, enough to brainwash 51% of the electorate.

4) They have little to no experience dealing with the real - have never had to make an arguement, sell an idea or meet minimum standards of logic/facts outside the echo chamber of likeminded ideologues.

5) They are rank amatuers in all this business. One sign of their novice ignorance - they are sending out many conflicting and illogical stories trying to be all things to all people never thinking that this would cause a problem.

I would lean toward #3. How many tough questions has Obama been asked over the years? His campaign staff didn't even ask him any tough questions about Rev. Wright. Through sheer luck (I presume), Rev. Wright happened to be out of the country on a cruise when this long-looming scandal finally surfaced, so the Rev. wasn't around to respond to Obama's gassy Philadelphia race speech.

What Obama didn't realize was just how interesting Navy SEALs shooting bin Laden would be, and how, therefore, the press, for once, wouldn't be able to stop itself asking questions. Americans have been well trained over the decades to not be interested in Rev. Wright-type stuff, to accept whatever explanation Obama stayed up all night to dream up. But we can't help being really, really interested in this kind of action movie stuff.

So, Obama's instinct was that this event would be like most of the others in his life: he and his people would get to talk all they want, but nobody else would ask any tough questions about everything they said.

Still, the most obvious comparison is to Bush, who was completely clueless, apparently, that OBL was living in Greater Islamabad from 2003 onward. By that standard Obama looks awfully good.