The Washington Post has put some reprehensible of junk on its front page to promote diversity, but Wednesday’s edition was worthy of a great newspaper. It informed the American people of a terrible injustice, and shined a light on the murderous brutality of Islam toward women and girls. The liberal press hates to admit the inequality of cultures, but the facts of Islamic misogyny are irrefutable and burble out from time to time. 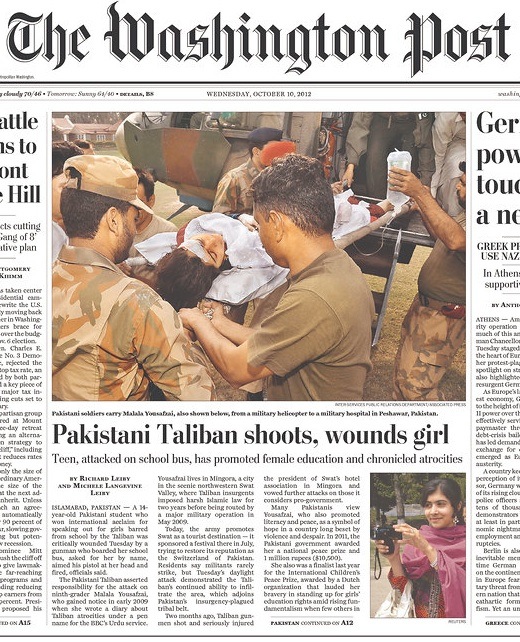 The shooting victim, 14-year-old Malala Yousafzai, was an outspoken blogger (albeit under a pseudonym) and advocate of education for girls, which is the reason for the Taliban’s fury.

Plus, the Taliban thugs promise that if Malala survives, they will shoot her again. Such is diversity in the Islamic world.

ISLAMABAD — In a country where militant attacks occur almost daily, the Taliban’s attempted assassination of a 14-year-old education rights activist in northwestern Pakistan united Pakistanis from across social divides Wednesday in a remarkable and rare display of collective outrage against extremism.

The shooting Tuesday of Malala Yousafzai, who remains in critical condition in a Peshawar military hospital, brought condemnation from conservative clerics, secular politicians, the military and media figures at a time when Pakistanis had seemed almost numb to rising extremism.

More than 3,000 people died last year in extremist attacks here, but images of the bandaged, unconscious teenager prompted a national debate about the corrosive impact of Talibanization.

“The world image of Pakistan is, to put it mildly, not very good,” said Ijaz Khattak, a professor at the University of Peshawar who knows Yousafzai and her father, an educator and peace activist in Swat. “Society is seen as increasingly sympathetic to these terrorists. What this incident can prove to be is a catalyst, because the outrage can turn the tide against the religious fundamentalism.”

Yousafzai was already a national hero for her fearless opposition to the Taliban, which closed her father’s school and other girls’ schools in Swat when the militants imposed harsh Islamic law there from 2007 until 2009. In conversations Wednesday, Pakistanis referred to her as “that brave girl” and tuned into television networks’ constant updates on her condition after surgeons removed the life-threatening bullet.

Doctors said her prognosis had improved.

An editorial Wednesday in the News, an English-language daily, seemed to capture the national mood: “Malala Yousafzai is in critical condition today, and so is Pakistan,” it said. “We are infected with the cancer of extremism, and unless it is cut out we will slide ever further into the bestiality that this latest atrocity exemplifies.”

Police said they have identified a shooting suspect but have not apprehended him. Akbar Khan Hoti, chief of police for Khyber Pakhtunkhwa province, told a television news channel that the attacker traveled from eastern Afghanistan.

The provincial administration, meanwhile, announced a $100,000 reward for information leading to the suspect’s capture.

The general, rarely in the public eye, was the first national leader to visit the teenager — upstaging civilian politicians in a symbolic show of where power truly lies in Pakistan. In a news release, Kayani sought to draw a sharp line between Islam and the Taliban, saying, “Islam guarantees each individual — male or female — equal and inalienable rights to life, property and human dignity.”

Those who attacked Yousafzai and her fellow students, he said, “have no respect even for the golden words of the prophet .?.?. that ‘the one who is not kind to children, is not amongst us.’?”

Interior Minister Rehman Malik used Twitter to make the same distinction: “I am proud of my nation as we always stand united together in all our difficult moments. Terrorists are [neither] Pakistani nor Muslim.”

The Lahore-based Islamic group Jamat ud Dawah — which describes itself as a charity but is considered a terrorist front by U.S. officials — also took to Twitter to condemn what it called the “shameful, despicable, barbaric attempt” to kill Yousafzai.

“Curse b upon assassins and perpetrators,” the group tweeted.

Although Islamist parties hold few seats in Parliament, their influence has been outsize in recent years. Liberal-minded politicians, who recognize the sway that clerics hold over an increasingly conservative public, have been loath to challenge the power of reactionary groups and leaders who claim to speak for Islam.

The ruling Pakistan People’s Party bowed to the clerics’ influence last month by calling a public holiday so people could peacefully protest an anti-Islamic video on YouTube. The decision backfired when hard-liners hijacked rallies and an estimated 30 people died in riots in several cities.

The global condemnation of the attack on Yousafzai shared overtones with the disgust voiced internationally in August over the jailing of a 14-year-old Pakistani Christian girl on anti-blasphemy charges. A mob had threatened to burn the girl alive for allegedly desecrating the Koran, but the case gradually fell apart amid allegations that she was framed by a local cleric.

Pakistani politicians rallied around the girl at first, although they were wary of speaking too forcefully: Two political leaders were assassinated in 2011 for advocating reform to the country’s law against blasphemy.

After the outcry over the anti-Islam video last month, any talk of amending the law seems to have abruptly ended.

“We feel that extremism is rising at an unchecked rate now,” said Xavier William, a Christian who leads the nondenominational tolerance group Life for All in Pakistan.

But William said the two teenagers have challenged extremism in a way few others have. “These two 14-year-old girls are icons now,” he said. “They gave the people a reason to think, and they basically started a change.”