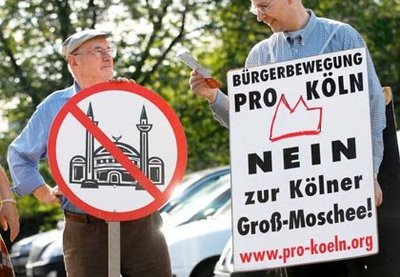 Concerned citizens of Cologne fought for years against the mega mosque planned by the local Soldiers of Allah. Now however the edifice is being built with foreign funding, and Germans are shocked at its size, although they shouldn’t be, since mega mosques are political structures designed to demonstrate Islam’s dominance.

The massive edifice, visible from blocks away, is being financed by the government of Turkey which is working to expand Islamic power in Europe. Turkey’s Prime Minister Recep Erdogan periodically visits his Germany-residing tribe to remind them that their loyalty should be to their homeland and Islam, not to infidel nations. Just so there would be no misunderstanding, he declared in 2008 that “Assimilation is a crime against humanity.”

CBN’s Erick Stakelbeck traveled to Cologne to check it out:

The Cologne mosque debacle is yet another reminder that Muslim immigration is a one-way street to cultural and national security disaster. Diversity enthusiasts like to fantasize that Muslims assimilate well to America, which may be true of some but certainly not all. For example, Hamtramck Muslims steamrolled over local noise prohibitions to have the call to prayer (which is actually a prayer itself) with loudspeakers five times daily. Numerous Muslims have tried to mass-murder Americans for jihad, as shown by the many terror trials, little noticed by the mainstream media. Mike Mohamad Agemy, who drove his SUV into a group of Christians in Dearborn last June received probation just this week for attempted murder.

Anyway, back to Cologne, a canary in the coal mine of civilization jihad:

COLOGNE, Germany — There was a time when the Turkish-led Ottoman Empire ruled over a large chunk of Europe. Now some believe the Turks want to bring back those old glory days.

The Turkish government has embarked on a mosque-building campaign throughout Germany.

One new Turkish mega-mosque, the Cologne Central Mosque, has Germans on edge.

When construction on the facility is completed, it will be Germany’s largest Muslim house of worship – and one of the largest mosques in all of Europe.

It’s so big that it stops passersby in their tracks. The structure’s 100-foot-high-plus minarets tower over the local landscape and can be seen from blocks away.

The $40 million-plus facility will hold at least 1,200 worshippers and include a restaurant, a prayer room, a library, and more.

Germany is home to some 4.3 million Muslims, including 125,000 who live in Cologne. The large majority are Turkish.

Although Cologne already has some 30 mosques, one German Muslim activist told CBN News the new facility is needed.

“You had for years, for decades, you had very, very ugly places in the poorest parts of Cologne, underground,” Muslim activist Ibrahim el-Zayat said.

El-Zayat helps support mosque projects throughout Europe. His critics have said he’s a radical Islamist with ties to the Muslim Brotherhood.

He denied the charge, saying he’s only trying to help Muslims take their rightful place in German society.

A Political Statement
Michael Höhne-Pattberg is an anti-jihad activist based in Cologne. He told CBN News the new mega-mosque is a political statement designed to show Islamic dominance in the city.

It’s no coincidence, he added, that Cologne is also home to the famed High Cathedral of St. Peter, a historic landmark and symbol of German Catholicism.

“The cathedral is the largest Christian building north of the Alps, and the four Islamic Turkish associations also have their center in Cologne,” he noted. “That is with a purpose to challenge the sovereignty of Christianity in Cologne.”

Not far from Cologne, in the small German town of Herten, locals are experiencing similar issues. Herten’s population is 10 percent Turkish Muslim and rapidly growing.

Jutta Becker is a member of Herten’s city council. She took CBN News to Herten’s so-called “blue mosque,” where cars were decorated with Turkish flags.

Becker said the town’s Christian leaders have been silent in the face of Islam’s growth.? ?”When there are so-called Christian-Islamic dialogue meetings, both the Catholic priests and the Protestant ministers ask me not to open my mouth and cause any trouble,” she told CBN News. “I’ve got a reputation for stirring up things because I will not take the Islamization of this town lying down.”

In Germany, critics of Islamization are often labeled by the major media and the left as “Nazis” and “racists.”

“It’s always the same argument, their knock’em dead argument:­ you’re a right radical or a populist radical or you’re a Nazi or you’re a foreign hater,” said Claudia Ludwig, head of the Independent Citizens Party in the town of Recklinghausen, north of Cologne.

She believes many German Turks are more attached to their home country than to Germany.

“The Turks in Germany regard (Turkey’s Prime Minister Recep Tayyip) Erdogan–and not the chancellor of Germany–as their leader,” she said.

Assimilation ‘Crime Against Humanity’
In 2008, Erdogan told an audience of Germany’s Turks that assimilation into German society would be “a crime against humanity.” He believes Turks should keep a separate identity.

Erdogan’s government is directly involved in the building and supervision of mosques across Germany, including the Cologne Mega Mosque, through a cultural organization called DTIB.

DTIB acts as an arm of the Turkish government in Germany – with Germany’s full permission.

“They should be looked at as enrichment, not as threats,” el-Zayat said. “So if we say Erdogan has a relation to the people, that’s absolutely fine.”

Yet Erdogan’s regime has forged closer ties with its Islamic neighbors in recent years and is fiercely anti-Israel.

That has some in Cologne wondering whether the new mosque will really be the beacon of tolerance that el-Zayat would suggest.