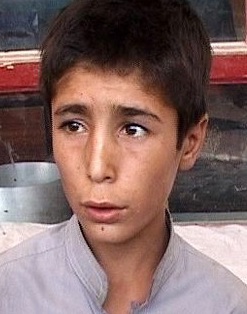 Over in Afghanistan, the manly men of Islam get little kids to blow themselves up by lying to them that bomb belts they wear will not kill them, only the hated infidel Americans.

Curiously, the Mohammed bunch regards their ideology as superior, “the most moral, ethical religion on earth.”

That being the case, it seems unwise to admit substantial immigrant diversity from people who think tricking children into suicide is acceptable. The United States has an estimated 300,000 immigrants from Afghanistan, a population which includes supporters of the Taliban in Fremont, California, and presumably beyond.

Say, if murder for Allah is so wonderful and gets you 72 virgins in paradise, then why aren’t adult Talibans lining up to go kablooey?

The Taliban recruits kids as young as nine to be suicide bombers. Afghan culture does not have an ethic of protecting children — see Normal Afghan Pederasty for an example.

The boy pictured, 13-year-old Abdul Samat, is alive only because he smelled a rat and started screaming for help.

Afghan boy suicide bombers tell how they are brainwashed into believing they will survive,Daily Telegraph, January 13, 2012

Child suicide bombers say they were told by their handlers that the “bombs would not kill us, only the Americans would die”.

The mission was as simple as touching two wires together, the little boy was promised. The resulting blast would obliterate the American infidels – but God would spare him from the flame and shrapnel. Abdul Samat would be unharmed and free to run back to the men who had fitted his bomb vest.

Blindfolded and rigged with his explosive payload, the boy, who was about 13, was driven to his target in the Afghan city of Kandahar, after being plucked from the streets of Quetta in neighbouring Pakistan. Minutes before he was due to execute the attack, however, Abdul realised the lies of his recruiters seeking to turn him into a human bomb.

“When I opened my eyes, I saw it was a very black thing they wanted me to do,” he later recalled.

“I began to cry and shout. People came out of their houses and asked what was wrong. I showed them I had something in my vest. Then they were scared too and called the police who took the bombs off me.”

Afghan security officials say that Abdul’s story is not unusual. In the past year, insurgents have used a wave of child suicide bombers, some as young as 10, on the ruthless assumption that small boys can pass through checkpoints and security cordons more easily than men.

A senior Afghan intelligence official estimated that more than 100 had been intercepted in the past 12 months, including 20 from the Kandahar area in the south. The insurgents seek to exploit the innocence of their recruits and turn it into a weapon.

The largely illiterate boys are fed a diet of anti-Western and anti-Afghan government propaganda until they are prepared to kill, he said. But the boys are also assured that they will miraculously survive the devastation they cause.

“The worst part is that these children don’t think that they are killing themselves,” said the official. “They are often given an amulet containing Koranic verses. Mullahs tell them, ‘When this explodes you will survive and God will help you survive the fire. Only the infidels will be killed, you will be saved and your parents will go to paradise’.”

Throughout the war against the Soviet invaders in the 1980s, and the civil strife that followed, Afghan fighters of all factions rejected suicide attacks as cowardly and unIslamic.

The tactic was adopted only after 2001, learned from Arab jihadists who had used it to devastating effect in Iraq.

The first Afghan suicide bomber is believed to have been a man called Hafez Abdallah, who in 2004 threw himself on a military Jeep and detonated mortar bombs strapped to his body. Suicide bombs hidden in vehicles or sewn into vests have since been widely employed.

The Taliban denies using children as bombers, pointing out that its battlefield code forbids any military use of pre-pubescent boys. One Taliban facilitator from northern Afghanistan told The Daily Telegraph: “All our bombers are men and they are all volunteers. We never use boys.”

But Nato and Afghan security officials said the tactic has been widely adopted. Child bombers had been used by the Haqqani network, an insurgent group aligned to the Taliban.

Boys are frequently chosen from the madrassas, or Islamic colleges, in Pakistan’s tribal areas, where poor Pashtun families in southern Afghanistan send their sons for a free education.

Gul Khan, who looks no older than 10, said his father had insisted he go to a madrassa in Pakistan run by a man called Maulawi Sher Jan.

“Each day they were preaching that we would tie bombs on to our bodies and attack foreigners in Afghanistan,” he said after escaping and being arrested on the border.
“They told us the bombs would not kill us, only the Americans would die and you can come back to us.”

Many of the captured boys have been pardoned, but others remain in Afghanistan’s child jails. Once in custody, they often retract their televised confessions, justice officials in Kandahar said.

Three convicted child suicide bombers, seen by The Daily Telegraph, all said their confessions had been false and they were wrongly convicted. Haji Abdul Haq, the juvenile prosecutor for Kandahar, denied pressure had been placed on them and said they were often caught wearing bomb vests. “They confess at first, but when their families reach them, they change their minds,” he said.