The ICE removal of 200 illegal alien workers from Pacific Steel in Berkeley has been an opportunity for the liberal media to show its heartfelt empathy with illegal alien job stealers.

In December, the local ABC affiliate showed up to agree that’s it’s unfair to send the aliens packing right before Christmas: “Kicking these workers to the curb just before Christmas is really an act of hostility,” said Richmond Mayor Gayle McLaughlin (Pacific Steel forced to lay off 200 workers, Dec. 18, 2011).

Say, I’ll bet the new legal workers had a nice Christmas, what with California’s unemployment rate at 11.3 percent, as of November.

More recently, the Contra Costa Times showed up for the last day on the job for 200 illegals (out of 600 workers) to note the tears of sadness as they packed up their hard hats at Pacific Steel.

Again, the solicitude of the press for illegal foreign workers is over the top. You would think there is no jobs crisis of years’ duration in which formerly middle-class Americans are living in tents and once booming Silyicon Valley is filled with unemployed people running out of benefits and options.

But then, there’s little danger that reporters will be replaced by illegal workers, so there’s not much genuine empathy in the newsroom for job loss.

Below, workers at Berkeley’s Pacific Steel. 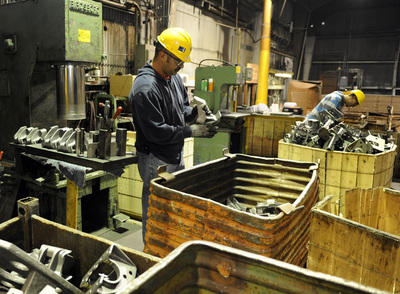 Aside from the press’ distracting show of overwrought sympathy, it should be noted how easy it was for the feds to clear out the illegal pests merely by requiring the business to run an I-9 audit to check the employees’ Social Security numbers. The legal tools to fix this problem have existed for years; what’s missing is the political will to eject cheap exploitable foreign workers. Too bad the DHS won’t the extra mile and repatriate them all but Obama doesn’t do deport.

The Republican Presidential candidates all agree that they will enforce the border, which is not a solution given modern transportation. The real frontline of immigration enforcement remains the workplace.

Tuesday began like any other workday for David Herrera.

Only his mother’s grave, distant expression as she cleaned their already immaculate Bay Point home suggested this would be his last day at Pacific Steel, where he worked for more than a decade.

A recent federal immigration audit found that approximately 200 employees, a third of the foundry’s workforce, couldn’t prove they are legal residents.

The company has been firing those workers in groups each week since October; the most senior employees worked their last day this week.

“Since I crossed the border, I always knew this could happen,” said Herrera, 37, who has mapped out an escape route at every factory he has worked at since he came to this country in 1991. “You get used to living with it.”

Around noon, Herrera put on his yellow hard-hat and got into his truck. On the porch lay an identical hat — his wife’s, who was fired from the same plant a few months ago.

Pacific Steel is one of the largest foundries in the nation. The company started making steel parts for trucks and buses in the shadow of Interstate 80 in West Berkeley 75 years ago, when the now-posh neighborhood was predominantly heavy industry.

The quality inspection warehouse where Herrera has worked for 12 years is dimly lit and filled with the roar of machines and the clanking of metal. Herrera took his place sorting metal pieces that connect trailers to trucks.

The men working on either side of him were new hires.

One of them, Braxton Flores, took this job last month because the pay was better than at Home Depot. Still, the 20-year-old El Sobrante resident sometimes feels uneasy.

“It’s sad because some of these guys have families — two or three kids and a wife,” he said. “I’m young, and the only person I take care of is my mom.”

Herrera believes his family will lose its Bay Point home. He was in the process of getting a loan modification but will now be disqualified because he will have no paystubs to show the lenders.

He is planning to move his wife, mother and three children into a trailer and drive to Washington state, where illegal immigrants can get driver’s licenses.

“It’s going to change a lot of things,” he said. “I’m not materialistic, but my family is accustomed to having stuff like computers and a television.”

Herrera and the other departing workers said stoic goodbyes, shaking hands and assuring each other they would be fine.

But the workers staying on were more emotional. Jose Tamayo, whose children are friends with Herrera’s, cried a few times during the day.

“There have been layoffs before, but it never felt like this,” he said. “We know these guys aren’t coming back.”

Tamayo said he was shocked that so many of his longtime colleagues and friends were in the country illegally.

In an “I-9 audit” — a reference to the I-9 employment-eligibility form and sometimes known as a “silent raid” — investigators check the legal status of workers through the Social Security numbers and other records they supplied to the business when hired. In the cases of many illegal immigrants, that documentation is forged.

Pacific Steel is now checking on new hires with the federal E-Verify program, as announced by two large posters in the main office.

Herrera says he will not return to his hometown in Michoacan, not wanting to subject his children to drug-war violence. He also fears they would not be able to afford higher education there.

Honor student stickers and student of the month plaques adorn the walls of their home.

During an evening break, Herrera explained that when his daughter turns 18, she will be able to petition for her parents’ citizenship.

“It’s a long time — I feel like I am entering a prison where I have to wait to be free,” he said, watching the cars speed down Gilman Street. “But I remind myself, there are people dying right now crossing the desert to get what I already have.”

Then he returned to the nearly empty foundry to finish his shift.