In Australia, the Islamo-diversity project is not going well, as the Sons of Allah have been growing more hostile as their numbers increase. Authorities report that Muslim crime and violence are out of hand in an immigrant-infested area of Sydney. Police already have a Middle Eastern Gang Squad formed after the Lebanese influx made such focus necessary, but it doesn’t seem enough.

Immigration is a fertile petri dish for gang crime anyway, with young immigrants often torn between the cultures of their parents and the new place. Feeling neither fish nor fowl, they join up with others who share their situation, and gangs result. Muslims’ normal hostility mixed into the gang stew just adds to the violence factor, particularly when jihadist ideology emphasizing power over reason convinces them that their crime is a dandy service to Allah.

Below: One example of Muslims’ failure to assimilate in Australia was the September riot over the Mohammed video in which several police were injured and nine Muslims were arrested. 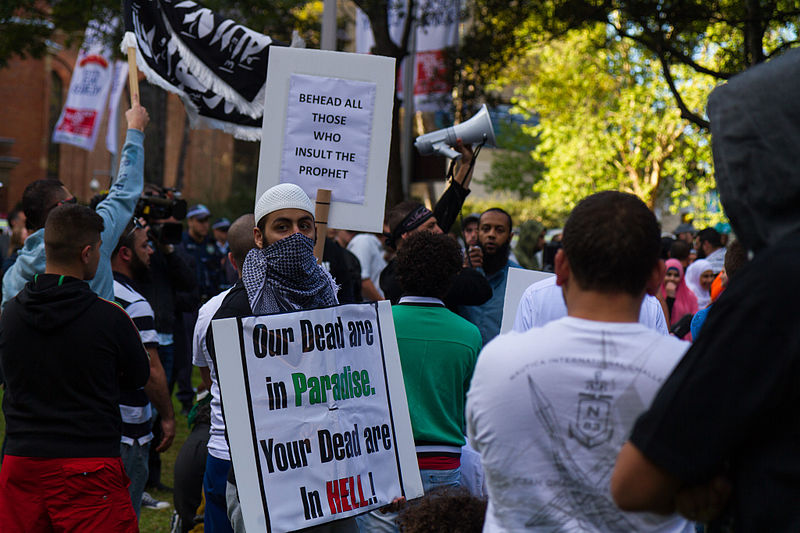 The recent report from Sydney indicates that Muslims have brought their Shia-Sunni argument with them. That’s what every receiving country wants to import — a new variety of violent tribal warfare!

Of course, Muslim immigration is the indisputable worst kind and should be avoided by any nation wanting to preserve domestic tranquility.

SHOOTINGS, extortion and general violence is so out of control in south-west Sydney that residents and children are seeking medical help for post-traumatic stress disorders.

Gangs from opposing religious sects are also extorting money from restaurants in the area with at least three premises fire-bombed or shot at in the past few weeks.

Police have confirmed they have set up a special taskforce to investigate the shootings.

“There are a number of shooting incidents at restaurants in the Bankstown area we are looking at,” said Detective Superintendent Debbie Wallace, head of the Middle Eastern Crime Squad.

“Victims of these types of crimes are very reluctant to come forward, naturally because of the fear,” Supt Wallace said.

She confirmed that in some cases religion is used by those making the threats.

“We need people to come forward and tell us before we can take action.”

Earlier this year police arrested three men on blackmail offences after they allegedly used threats to force the owner of Juicylicious in Bankstown to sell his business well under market the market price.

“If people report threats then we can investigate them and also protect them.”

One group made up of Muslim men contacts restaurant owners and says they “don’t want their type” – a Shia – operating in the area and try to intimidate them into handing over their business.

“They then offer to buy the business for a fraction of its worth, when they are turned down they get threatened on the phone. If they continue to resist they find there business targeting in other ways. Like being shot at or fires,” said one business operator.

Dr Jamal Riffi, a general practitioner and one of the most respected Muslim leaders in the area said he was seeing an increasing number of patients who were suffering anxiety from being extorted.

“I have patients who have small businesses who are being intimidated and extorted on a weekly basis,” he said.

“It is the worst I have ever seen it. Some of these men are hiding behind their religion, saying they are Muslims and have a right to do what they are doing. That is wrong. They are criminals threatening people in their own community.”

An angry Dr Riffi, who has a good relationship with police in the area and on the Middle eastern gang squad, said it was time the police hierarchy and politicians did something seriously about the problem.

“Politicians from both sides come out to the south-west, even the local members, eat a bit of homous and tabouli and then leave without addressing the problems.”

His patients at his Belmore practice are his eyes and ears of the community.

“This is the worst I have seen it in this area since I arrived in Australia in 1984. Even when Michael Kannan and his gang were running wild it was different,” he said.

“They knee-capped other gangster and did most of their violence in Kings Cross.”

Now he said young couples are too frightened to open businesses.

“One restaurant opened recently and was doing very well soon after opening. Then a fire destroys the place,” he said.

“No one is saying exactly what happened but all the business people are talking about it as extortion.

“I have patients who tell me it is better to pay, especially at the moment because the festive season is the most profitable and they can’t afford to have any trouble.”

“But we have to stand up to thses guys or else they will take over completely.”