Swiss Will Vote Whether to Limit Immigration

Switzerland has national referenda, in which the citizens vote their preferences about important issues facing the nation. The process has provided an interesting look at Swiss beliefs about immigration. In 2010 the Swiss voted for automatic deportation for foreign criminals. In 2009, voters approved a measure to ban minarets. In February of this year, the Swiss voted to reimpose limits on immigration from the European Union.

In 2012, a group collected signatures for a referendum on an environmentally based limit:

A group of Swiss environmentalists has collected enough signatures to force a national referendum on immigration.

The Ecopop group says natural resources are under increasing pressure from overpopulation.

It wants annual population growth through immigration capped at 0.2% and a tenth of foreign aid to be used for birth control measures abroad.

Switzerland now has a population of eight million people almost a quarter of them foreigners.

Ecopop gathered a petition with 120,700 certified signatures easily passing the 100,000 threshold needed for a referendum on the proposed new law.

The pressure on land, nature and the countryside is considerable, and quality of life is continuously deteriorating due to a lack of living space, said Ecopop member Philippe Roch, a former director of the Swiss environment department.

The Ecopop organization has a website in German: Ecopop.ch. They have a well produced video about rapid population growth in Switzerland, also in German: Was will die Ecopop-Initiative?

Below, a poster for the initiative shows a map of Switzerland covered by skyscrapers. 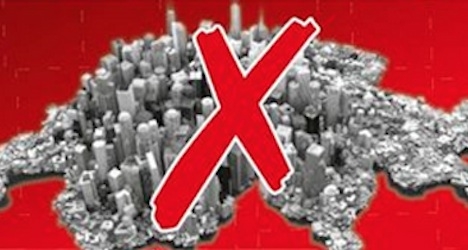 A recent report says the referendum, scheduled for November 30, is polling positively.

A majority of Swiss citizens support a proposal to limit annual net immigration to 0.2 percent of Switzerland’s population, a new survey indicates.

A poll showed 53 percent of those surveyed backed the so-called Ecopop proposal, designed to restrain population growth in Switzerland for environmental reasons by curbing the number of immigrants.

The online survey, conducted for 20 Minuten newspaper, found 42 percent of respondents said “yes” to the initiative, while 11 percent said they tended to support the bid.

Proponents of the Ecopop proposal argue that Switzerland is facing problems from urban sprawl, with immigration leading to unhealthy increases in density in major metropolitan areas.

The federal government and all major political parties have come out against the initiative, with Justice Minister Simonetta Sommaruga recently calling it “xenophobic” and harmful to the Swiss economy?, whiich she said depends on immigrants.

Swiss citizens will decide on the issue in a national vote on November 30th.

The survey involved 13,397 respondents with the data? weighted by political scientists to reflect demographic, geographic and political variables, 20 Minuten said.